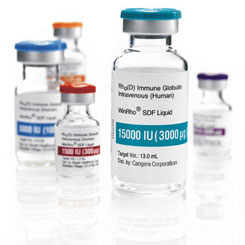 I am consistently asked about the safety of Anti-D injections. With this blog we have updated our previous post on this topic in an attempt to answer any lingering queries for parents and practitioners…

Anti-D injections are offered to all pregnant women with an RhD negative blood group to prevent their baby developing the potential blood disorder RHN (RhD haemolytic disease of the newborn). Understanding the medical terms and the details of this disorder and its prevention can seem rather complicated. But, as with any medical recommendation made during pregnancy, having plenty of information allows you a greater degree of clarity and confidence in your health choices and the decisions that you make. Below I look at some of the most frequently asked questions relating to this topic.

What are RhD negative and positive blood types and how are they important to my pregnancy?

The two important blood groups to know about in your pregnancy are the ABO and D groups (Rh D or rhesus blood group), and here we will be focusing on the latter.

Your D rhesus group can be positive (approximately 85 % of people) or negative (approximately 15 %). If you are RhD negative then you have a particular substance called antigen D on your red blood cells that can potentially cause problems in your pregnancy. Because we inherit one rhesus gene (either positive or negative) from each of our parents, it is possible for an RhD negative pregnant women to have a RhD positive baby. For first-time RhD negative mums, there is 60% chance that they do in fact carry a RhD positive baby. In essence this means there is a mismatch between the two blood groups which raises the possibility of serious complications.

What can happen if I have a different rhesus blood group to my baby?

Being RhD negative with an RhD positive baby means that if your baby’s blood mixes with yours during pregnancy your immune system may perceive this difference in blood types as a threat, producing antibodies that will ‘fight’ against your baby’s blood- a process called sensitisation (alloimmunisation). Once your body has made these antibodies they cannot be removed.

This possible attack on your baby’s blood can lead to the blood disease RHN (also called haemolytic disease of the newborn, Rhesus disease or Rh disease). RHN can manifest as anaemia, jaundice, and in severe cases as heart or liver problems, brain damage, miscarriage, stillbirth or death soon after delivery.

Importantly, sensitisation is unlikely to affect your current baby but rather becomes a problem if you have subsequent babies that are RhD positive. This is because it takes time for antibodies to build up and because the initial antibodies of your first pregnancy (IgM) cannot cross the placenta but the subsequent antibodies produced in later pregnancies (IgG) can.

I am RhD negative with an RhD positive baby, what is the chance I will produce antibodies against my baby’s blood?

You are most likely to produce these antibodies at times when blood exchange between you and your baby is possible: at delivery, after abortion or after an invasive procedure. In a 2006 review, researchers stated that without preventative treatment, 5-15% of RhD negative pregnant women will develop antibodies at delivery; 3-6% after spontaneous abortion; 2-5% during amniocentesis; and 1-2% due to haemorrhages of their baby’s blood.

What are Anti-D injections and when are they recommended?

If you are RhD negative you will be offered an anti-D injection to remove any of your baby’s red blood cells in your blood and stop your body producing anti D antibodies. The injections are derived from donor human blood and are tested for hepatitis C and B, parovirus B19 and HIV. The active substance in these injections is human anti-D immunoglobulin and other ingredients can include human albumin, glycine and sodium chloride. Since 2001 anti-D injections no longer contain thiomersal which is mercury derived. In 2008 the National Institute for Health and Clinical Excellence (NICE) published guidelines recommending that that one dose of anti-D be administered between weeks 28 and 30 of gestation.

Are the anti-D injections safe?

Anti-D injections have been used for approximately 40 years and are considered to be safe. Because anti-D injections are derived from human plasma there is a small risk that viruses can be transmitted to pregnant women receiving them. In regards to the other ingredients in anti-D injections, drug manufacturer Pfizer states that sodium chloride safety in pregnancy has not been established. As with any treatment, side effects are possible. UK Government -based web information include the following possible side effects of anti-D injections of unknown frequency:  tightness of the chest, wheezing, breathing difficulties or shock, chills, faster heart rate, fever, general feeling of being unwell, headaches, injection site problems such as pain or tenderness, lowered blood pressure, nausea, skin problems, vomiting.

Will I need the anti-D injection?

Anti D injections are only relevant to RhD negative pregnant women because of the chance that they may have an RhD positive baby. If you are RhD negative and are certain of paternity, then a paternal blood test can be conducted. If both you and your partner are RhD negative then it is not possible for your baby to be RhD positive and you will not need to have anti-D injections. There is also non- routine testing that has been developed called non-invasive prenatal diagnosis (NIPD) where your baby’s RhD status is assessed. The accuracy of this testing has been reported as between 94.8% -100%.

It can be a tricky decision to know what to do in this situation and this is why it is important to have all necessary information on hand. I would recommend that you do your own research, speak with your carers and as always — trust your instincts.
. . . . .