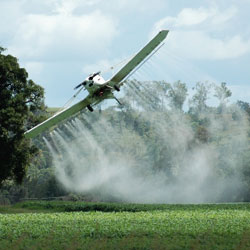 Do you nibble on nuts and dried fruits all day without realizing they are an enormous source of pesticides? Did you know that wheat (typically eaten for breakfast, lunch and dinner) is one of our greatest sources of pesticide exposure?

And who knew (not me) that that the American Academy states that there is significant research that early childhood exposure to pesticides is associated with paediatric cancers, decreased cognitive function and behavioral problems?1

I have friends and family who like to tout that some studies have shown that organic produce does not have more health benefits than generic fruit and vegetables. In my post “Is Organic a Con?” I looked at this research and dug a little deeper to try and decipher who has paid for and promoted the studies and found that they were extremely flawed. Interestingly a drug company who owns large portions of the fresh produce market in the US sponsored the research with little wonder why. In1997, sales of organic foods were worth $3.6 billion in the USA; this has since risen to more than $26 billion in 20102. You don’t have to be the sharpest tool in the toolbox to appreciate that this means commercial farmers and co-ops have taken a hit in the last ten years and investors are happy to pay for research that supports their share of the market. In this previous post I also looked at how to reduce the cost of buying organic produce, and which fruits and vegetables the EWG list as most and least contaminated with pesticides. I have included the EWG list in both my books Well Adjusted Babies, and Ticklish.


But enough with trying to compare the nutritional value of organic to non-organic produce as The American Journal of Clinical Nutrition, 20102 states: “each study and review has reached a similar conclusion that definitive findings cannot be drawn due to the lack in quantity and quality of comparable data.” Let’s talk about the real issues…

Could pesticides be contributing to early puberty for your child or causing attention and behavioural issues?

Why should we be concerned? — Endocrine (Hormone) Disrupting Chemicals (EDC’s)

One large concern with pesticide exposure is the role they can play in disrupting the endocrine (hormonal) system of humans and animals. Thousands of endocrine disrupting chemicals (EDC’s) are now known; 46% of insecticides, 21% of herbicides and 31% of fungicides are on the EDC list, some withdrawn from use but still found in the environment7.

Endocrine disrupting chemicals interfere with our natural hormones by attaching to the normal hormone receptors on our cells. For simplicity’s sake, picture each of your hormone molecules (for example oestrogen or testosterone) connecting with the receptors in your body like keys in a lock, enabling the hormone to take effect. Instead of your own hormones opening these ‘receptor locks’, unnatural chemical EDC’s begin to do so, activating or blocking receptors, and mimicking what should be your body’s natural responses.

How might pesticides be affecting children and young people, particularly their attention and behaviour?

These days we are seeing some rather concerning rates of childhood and adolescent mental and behavioural problems. Whilst it’s impossible to point the finger at any single factor, research is showing that exposure to pesticide chemicals, especially prenatally, is having a big impact on the health of our children.

One researcher states that prenatal exposure to pesticides (organophosphates) has been associated with pervasive developmental disorders, delays in cognitive development, and attentional deficits, and is associated to behavioural problems, poorer short-term memory and motor skills, and longer reaction times in children8. They conclude that the current level of organophosphate pesticides our children are exposed to may be contributing to the prevalence of ADHD we are seeing in society today. In another study looking at urinary concentrations of pesticide metabolites and ADHD in children aged 8-15 years, the higher the urinary concentrations, the more likely the diagnosis of ADHD9. Considering more concentrated exposures to pesticides in adolescent agricultural workers, there is suggestion that they contribute to depression, impulsivity and may in part explain the association between exposure to organophosphates and higher levels of suicide8.

The rate of developmental issues increases every year. “In a recent Australian study of 4500 children, 14% of Australian children were found to have a mental health problem, with depression in 3% and attention deficit hyperactivity in 11%. Considering autism, previously estimated to affect 4 in 10,000 children in 1985, more recent estimates indicate a rate in the UK of 1 in 150, and in parts of the USA, 1 in 90.”10.

It is thought that just about every child conceived in the Northern hemisphere is exposed to pesticides from conception onwards11. Many pesticides are neurotoxins (kill brain cells), and it is known that children’s developing brains are particularly susceptible to them both because a child’s low body weight makes the dose of pesticides larger (in relative terms), and because they have less detoxifying enzymes available to deactivate the pesticides they are exposed to8. Studies have indicated that children aged between 6-11 have higher concentrations of organophosphate pesticide markers in their urine than any other age group in the U.S.12

The health impact of pesticides may not manifest until generations down the line. Via epigenetic changes, where pesticides have the capacity to change the expression of our genes, we may be altering our health at the deepest level. Put simply; it is not only our children, but our grandchildren and great children who may be influenced by the long-standing health impact these chemicals have on the body.

“Many endocrine disrupting pesticides are harmful at very low doses, especially if exposure occurs during sensitive stages of development, producing effects that may not manifest for many years, or that affect descendants via epigenetic changes. Exposure to them is unknown and the effects are poorly quantified, especially for vulnerable groups such as foetuses and children less than three years old. Conventional toxicological testing of pesticides can miss the potential of a substance to disrupt the endocrine (hormonal) system, especially at the low concentrations likely to be found in the environment”13.

So how are our children being exposed on a day-to-day basis?

We are all exposed to pesticides from many sources including water, soil, air, but diet is one of the most common sources of chronic everyday exposure.

An in-depth French study looked at 325 pesticides and 194 food items covering 90% of the adult and child diet. Around 19,000 food products were purchased throughout different seasons from 2007 to 2009 in 36 French cities. Thirty seven percent of the samples contained one or more of 73 different pesticide residues and 10% were above the acceptable daily limit5.

Wheat is one particular food in our diet that has generally been receiving more attention with regards to health. Wheat is one of the world’s biggest staple foods and the major grain used in Australia10. Six hundred and eighty million tons were produced worldwide in 2009, making up 30% of the world’s crop consumption13. But aside from any of the intrinsic components of wheat that may be affecting our health (for instance gliadens effect on our immune system), pesticide residues on wheat grains may pose a health risk when consuming wheat-based food products13.

The degree of wheat-based pesticide exposure will no doubt be affected by the fact that we eat a lot of wheat. It is hard to ever imagine that we could be eating 51 kg of bread each year, but studies suggest the average person indeed does!10.

Wheat sneaks into our daily diet more easily than we think and adds up quickly – toast or cereal for breakfast, a muffin for morning tea, sandwiches for lunch, some crackers or cookies mid-afternoon, pasta for dinner….By the end of the day it is quite possible that we (and our kids) have had numerous servings of wheat-based products. Because wheat is everywhere, and because it is filling and inexpensive, it becomes an easy and convenient part of our diet. Oftentimes, we have never gone long enough without wheat to know we might be feeling a whole lot better without it.

What can we do to reduce the load and enhance the health of our children?

“Infants and children receive disproportionately large exposures to some organochlorines and newer less persistent pesticides because their diets generally contain a lot of fruit and vegetable products. A study of children fed organic and conventional diets found that those with an organic diet had lower mean total urinary molar concentrations of dimethyl organophosphate metabolites and therefore lower pesticide exposures than those fed conventional diets” 16.

If organic foods are unavailable then a natural vegetable wash can be used that will help to remove residues off the surface of conventional fruits and veggies (these washes are now offered at many health food stores and some supermarkets).

If you are eating wheat, then opting for organic wheat-based products can also reduce pesticide exposure, or you could try experimenting with a variety of different organic grains as a wheat replacement.
Keeping consumption of oily fish, meat and dairy products to moderate levels can also reduce exposure as it has been found that the older more persistent types of pesticides, such as the organochlorines, have a tendency to accumulate in the fats of these products 16.

Truth be said, it is simply impossible to eliminate all the nasties in our surrounding environment, and our children are particularly susceptible to chemicals and their effects on mental development and behaviour. But I believe that when we seek to balance our health from a range of perspectives we have the best possible chance to minimise and combat the daily chemical toxicity they are exposed to. By eating a diet based in (preferably organic) whole-foods and plant foods, exercising and getting fresh air, taking time to relax, have fun, learn, and connect as a family, and by looking after our spine and nervous system, our children will directly benefit. The added bonus is that they will learn from the family health culture we create, how to look after their own health as they grow.