8 Foods That Feed Your Brain

8 Foods That Feed Your Brain 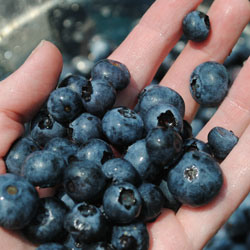 In Tips to Grow Your Brain we talked about simple things we can do to keep our brain as “sharp as a tack.” There are also many different types of food we can eat that support the health of the brain and the nervous system. Here are eight types of food I’d recommend eating regularly to keep your ‘wits about you’…

Yep, those delicious blue little berries have a mountain of research to suggest they are one of the best, if not the BEST brain food money can buy. Published scientific studies show that blueberries are packed with nutrients that not only improve brain function, but that also protect delicate brain structures against oxidative damage.

Rich in powerful polyphenol compounds, blueberries have been shown to uniquely protect the brain against free radicals, radiation, inflammation, aging, and the damaging effects of neurotoxins.1
Scientists have noted that blueberry compounds are readily absorbed into the bloodstream, then cross into the brain where they influence regions involved in memory and motor function—suggesting therapeutic roles against Parkinson’s and Alzheimer’s.2

In animal studies3, a blueberry-enriched diet has been shown to protect against loss of brain cells seen with different types of brain injury and aging, as well as against impairments in memory, learning, and co-ordination. The studies showed that diets rich in blueberries significantly improved both the learning capacity and motor skills of aging rats, making them mentally equivalent too much younger rats.

Fish is very high in Essential Fatty Acids (EFAs),which are extremely important fats that support the cardiovascular, reproductive, immune, and nervous systems. Unfortunately, humans cannot synthesise EFAs so they must be obtained through diet.

3) Other Sources of Essential Fatty Acids

NOTE: Vegetarian sources of omega-3 fatty acids are good additions to the diet but not so reliable as fish.

This yellow spice is being carefully studied for its medicinal effects. It is a powerful anti-inflammatory agent that has anticancer properties and may offer significant protection against Alzheimer’s disease. Alzheimer’s begins as an inflammatory process in the brain. India has the world’s lowest rate of Alzheimer’s, and some experts think that daily consumption of turmeric is a contributing factor.

5) Other Fruits and Vegetables

Evidence suggests that diets high in fruit and vegetable content, particularly those of dark colour (blueberries, strawberries, spinach) may help protect against oxidative stress and may improve cognitive and motor function.8

Dark chocolate is an anti-oxidant powerhouse. Dark chocolate is one of nature’s most concentrated sources of theobromine — a mild, natural stimulant which helps to keep us focused (different to caffeine and does not strongly stimulate the central nervous system). It also contains Phenylethylamine (PEA) which releases endorphins, our natural feel-good chemicals helping to lift our mood.

NOTE: A slight deficiency of vitamin B-12 can lead to anemia, fatigue, mania, and depression, while a long term deficiency can cause permanent damage to the brain and central nervous system. Vitamin B12 can only be manufactured by bacteria and can only be found naturally in animal products, however, synthetic forms are widely available and added to many foods like cereals.

Vitamin B12 can be consumed in large doses because excess is excreted by the body or stored in the liver for use when supplies are scarce. Stores of B12 can last for up to a year.

Top 10 Foods Highest in Vitamin B1:

Other sources include seaweed and spirulina.

Wholegrain foods, such as good cereals and bread, oats, rye, millet, quinoa whole grains are excellent brain foods as they improve circulation and contain essential fibers, vitamins, and even some Omega-3. These foods are a great source of folic acid, vitamin B12 and B6, which help prevent homocysteine from building up in the body — levels of which have been found to be higher in people who have Alzheimer’s. One study found that women who increased their folic acid, vitamin B12 and vitamin B6 intake showed an improvement in recalling information compared to women who were not taking a supplement.

They are also often a source Vitamin E, the American Journal of Epidemiology7 suggests that a good intake of vitamin E might help to prevent poor memory.

Whole grains also contain complex carbohydrates which release energy over a long period and will keep you more mentally alert throughout the day.

A good diet is certainly not the only way to protect and enhance brain health there are many lifestyle habits etc that we can explore as outlined in TIPS TO GROW YOUR BRAIN. Food choices do however count. So it’s important to eat fruits and vegetables, think about your daily dose of omega-3s, nibble on dark chocolate, and consider flavouring more of your food with turmeric!