In answer to the question “Will my breastfed baby be affected by what I eat and drink?”… The answer is yes, a mother’s milk will pass consumed substances such as food, alcohol and other chemicals through to her child. This can be either advantageous or detrimental, depending upon the mother’s awareness and her lifestyle habits… 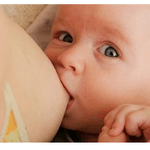 Alcohol, caffeine, environmental toxins, recreational drugs and prescription and over-the-counter medications all pass through breast milk to our babies. These substances are mildly filtered by the mother’s metabolism but their harmful effects will still impact her child due to their small body-weight ratio. As breastfeeding mothers we need to be mindful of this. (Please see: Reducing Breast Milk Toxicity, Chapter 14, Well Adjusted Babies; and The placenta: Not the barrier we once thought)

Right from the start let us be clear that the placenta marginally protects an unborn baby from infection but research now shows it does not act as a barrier for alcohol, drugs and other toxins. If your mother-in-law tries to coerce you into having a glass of red with her at the “weekly family get-togethers” and you are hesitant then trust that intuition knowing that there is now ample research telling us that alcohol, caffeine, recreational drugs, prescription and over-the-counter medications all pass through our breast milk to our baby.

Consider a pregnant woman who weighs 50kg (for ease of calculation) and takes a drug that crosses through the placenta undiminished. Her developing baby, when its weight is less than 100 g, has 500 times the drug exposure per kg of tissue than she does herself (Ref.: Morris). This example demonstrates how the dosage the mother consumes may have mild effects for her own physiology but enormous ramifications for a delicate and vulnerable developing baby.

Interesting facts about alcohol and breastfeeding

From the Australian Breastfeeding Association guide for mothers:

The Canadian Family Physician journal reports several proven or potential adverse effects of alcohol on suckling infants even after exposure to only moderate levels, including:

The safest option is not to drink

If you choose to drink alcohol please:

What should I do if I am going to have a planned night of drinking?

Social events don’t stop just because we become “a parent”. Even for non-drinkers there may be times when you want to attend an event and you may want to have a few drink socially. Remember:

You may find that your milk flow is not as strong as usual while there’s still alcohol in your blood. Your milk flow will come back to normal again once your body has cleared the alcohol.

In contrast to alcohol exposure during pregnancy, a breastfeeding mother who occasionally has alcohol can limit her baby’s exposure by timing breast feeds in relation to drinking. This is because alcohol peaks in a mothers’ bloodstream approximately 30-60 minutes after she stops drinking, and decreases from that point onwards (Lawton, 1985; Mennella & Beauchamp, 1991).

Note that contrary to popular belief, it has been shown that infants actually ingest less breast milk in the few hours following a mothers’ consumption of alcohol than normal, due to the direct effect that alcohol has on a mothers’ milk production (Mennella & Beauchamp, 1991, 1993).

For further information the Australian government has new national guidelines for alcohol consumption that have been developed by the National Health and Medical Research Council to help you reduce the risk of harm from alcohol to both your baby and you. The guidelines are based on the best available scientific research and evidence.

PrevPrevious ArticleEpigenetics End Concerns About Genetic Predispositions
Next ArticleAre You Getting Enough Sleep?Next