Is Organic a Con?

Is Organic a Con? 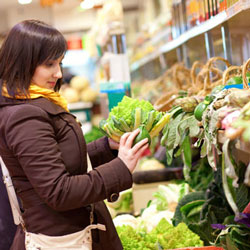 Are you a bit random with your organic purchases?

This time of year the family budget is often at its limit and sometimes we may have to reduce the number of our organic purchases, however please see my post on Tempted By Summer Fruits for the benefits of sourcing a fruit and vegetable wash to remove a large percentage of the chemical residue that lies on the surface of the fruit.

A comment voiced at times during health talks when I encourage parents to consider organic produce is, “But organic foods are so much more expensive than regular fruit and vegetables.”

That’s a genuine concern for many parents, and with this post I’d like to discuss how to make purchasing organic fruit and vegetables cheaper and what are the ‘real’ benefits of prioritising organic food for our health.

Getting Clear on the Benefits of Eating Organic Foods

Another statement people may make is, “I read that organic fruit and vegetables aren’t actually that much better for us, so why would we pay more for them?”

Some studies have indeed claimed that organic produce does not have more health benefits then generic fruit and vegetables—but these same studies have been found to be extremely flawed.1 I love to read research almost as much as I love to try and decipher who has paid for and promoted the research. In 1997, sales of organic foods were worth $3.6 billion in the USA; this has risen to more than $26 billion in 2010.2 You don’t have to be the sharpest tool in the toolbox to appreciate that this means commercial farmers and co-ops have taken a hit in the last ten years and big investors will pay for research that supports their share of the market.

For example the UK Soil Association3 took great offense to a US study conducted by a drug company that discredited the value of organic farming and they replied with, “Studies that treat crop trials as if they were clinical trials of medicines, like this one, exaggerate the variation between studies, and drown out the real differences. A UK review paper, using the correct statistical analysis, has found that most of the differences in nutrient levels between organic and non-organic fruit and vegetables seen in this US study are actually highly significant.”

If you prioritize your budget to allow for organic foods and you are faced with the above statement that questions the authenticity of organic fruit and vegetables, then take heart in knowing that several reviews including The American Journal of Clinical Nutrition, 20104 have attempted to definitively compare the nutritional quality between organic and conventional crops. However, each study and review has reached a similar conclusion that definitive findings cannot be drawn due to the lack in quantity and quality of comparable data.

Nevertheless, some generalized trends have been observed and the current literature shows that organic produce, in comparison to conventional produce has been shown to:

Furthermore no one can comment as to the long-term benefits of consuming organic foods versus conventional foods, as there has been no health studies which have concentrated on the long-term health outcomes. 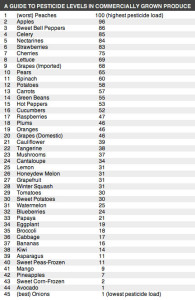 The EWG have developed a pesticide guide for fruits and vegetables (shown here, to the right). The produce ranking was developed by analysts based on the results of nearly 43,000 tests for pesticides on produce collected by the US Department of Agriculture and the US Food and Drug Administration between 2000 and 2005. Print out the attachment and put it in your wallet.

12 most contaminated fruits and vegetables are;

In the post How Clean Are You, we discussed how more and more evidence shows that what we eat determines not only our short-term health (emotional, physical and mental) but also our long-term health and our disease patterns in the future.

Most chronic diseases today did not exist 100 years ago and do not exist in parts of the world that maintain traditional diets. Our genetics have not changed – but the foods we eat have changed dramatically.

Purchasing organic food is not a luxury
but rather an integral step in securing our health.

P.S. Please also see my post “7 Ways to Reduce the Cost of Organic Fruit and Vegetables”.