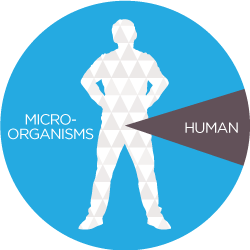 A little boy’s father was confined to his bed with influenza and his wife had been very busy sterilizing all his dishes. “Why do you do that, Mummy?” “Because dear, Daddy has germs and the germs get on the dishes he uses. I boil the dishes and that kills the germs. The little boy reflected a moment or two and then said. “Mummy, why not boil Daddy and get rid of the germs all at once?”

Oh — I love how kids are always so wonderfully practical!

This little boy’s name could have been Louis. Much of our current ‘medical model’ or medical approach for health care was founded on the work of one man, Louis Pasteur (1822-1895). Pasteur spent much of his time researching the microbe and he is well known for his discoveries relating to the principles of vaccination, microbial fermentation and pasteurization. Many of you would know that Pasteur created the ‘germ theory,’ the idea that germs are floating around in the air and will attack us if we do not protect ourselves from their harm. He also believed that the human body is sterile — basically a blank slate free of germs.

We know today that this is not correct – and as human beings we are never alone… In fact, we are far more bacteria then we are actually human. 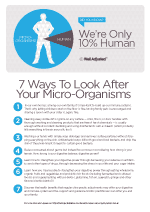 EASY-REFERENCE INFOSHEET:
“7 Ways To Look After Your Micro-Organisms”

Researchers have identified that at a cellular level we are indeed ONLY 10% HUMAN!!

“Really?” you may say. Yes and the remaining trillions of cells are actually bacteria, fungi and parasites that are living ON US and INSIDE US.1

Feeling a little bit dirty now? Hmmm… Me too!!

But before you rush to grab your hand sanitiser let’s examine how when we add our human cells and the trillions of other types of microbes found in our body — together, we create a “microbiome” an environment which is designed to work in balance. When it does – we experience digestive power, immune strength, balance of the gut-brain axis, robust health and vitality.2

In experiments where animals are raised in completely sterile (germ-free) environments, their immune systems do not develop normally and they developed serious immune diseases including allergy and autoimmunity.3 There is substantial research that outlines if the immune system is skewed by a bacterial imbalance then we see skewed immune responses which appears to the basis of so many of the health challenges children and adults alike face today.

When our “microbiome” is imbalanced, our digestion, immune function, state of mind and general health and well-being become not only unreliable but an imbalanced microbiome is now believed to be one of the primary causes of chronic infection, inflammation, autoimmunity, cardiovascular disease, chronic fatigue, cancer and neurological problems such as Alzheimers, autism and schizophrenia.4

The Canadian Medical Association Journal just a few months ago5 stated that “the disruption of the gut balance has been linked to an increasing number of diseases, including inflammatory bowel disease, diabetes, obesity, cancer, allergies and asthma.”

So… allow me to introduce you to these incredibly important microbes.

It’s Time To Get To Know The ‘Neighbours’

These important microbes (our neighbours) are found in all parts of our body — our skin, hair, mucus membranes, the lungs, etc. but by far the highest density of organisms) are found in the digestive tract.6 It must be emphasized that these microbes in the body are so important they are undeniably vital to human survival.

Our human cells live in a mutually beneficial way with these microbial genes and these neighbours of ours are responsible not only for “neighbourhood watch” but so much more, including7:

Talk about having GOOD neighbours – we certainly wouldn’t want to boil them up!!

Due to this MASSIVLEY SYMBIOTIC or WIN/WIN relationship much of the way we look at germs and infections has changed. Interestingly the Human Microbiome Project (HMP)7 was established in 2008 to look at different sites and strains of bacteria that we humans carry and the role they play in human health and disease. According to the Journal Genetics, “The microbial compostition of the forearms and the underarms are as ‘ecologically dissimiliar as rainforests are to deserts.”8

In future posts I’ll share with you the importance of this and the studies that demonstrate how babies born via caesarean birth host different types of bacteria to vaginally born babies, babies who are breastfed host different types of bacteria to formula fed babies and additionally how autistic children have been found to carry a variations in bacteria to children without autism. These studies and many more relating to psorasis, stomach ulcers, ulcerative colitis and Chrohn’s disease to name just a few, appear to indicate that we can use these variations in bacteria as a measured characteristic (biomarker) of biological states or conditions.

The importance with this being that if there are certain specific patterns of microbes that appear to relate to different disease or illness states then The More We Understand About Our Microbiome, The More We Will Then Understand How It Becomes Imbalanced and results in infection, sickness and disease AND so too will we hopefully be Better Address These Different Illnesses. It also appears that each individual’s community of gut microbes is unique and profoundly sensitive to environmental conditions, beginning at birth and potentially within the womb (in-utero).

It interests me that back in the time of Pasteur he had two opposing theorists. One was a gentlemen named Antoine Beauchamp (1816–1908) who completely rejected Pasteur’s ideas and believed that germs and parasites will only survive in acidic and unfavourable conditions and therefore mere exposure to germs is not enough to get sick. Beauchamp believed, “The primary cause of disease is in us, always in us.” His philosophy forms the basis of many of today’s Alkaline Diets.

The other man who opposed Pasteur was Claude Bernard (1813-1878) and he concluded that susceptibility to infectious agents occurs if the body’s internal environment is unbalanced. He coined the term “milieu interieur” — French for “internal environment” — and believed that this terrain determined our level of health. He is quoted as saying “death sits in the bowels…” and “bad digestion is the root of all evil”. When you hear people speak about “good terrain” or bacterial balance, Bernard’s lifework forms a solid foundation here.

Pasteur verbally disagreed with Beauchamp and Bernard and at the time his theory seemed to fit the mindset of the people and establishment better. As a result pencillin and antibiotics were eagerly being formulated ironically at the same time that other lead thinkers were proposing simple theories relating to hygiene. Ignaz Semmelweis (1818-1865) began the “hygiene hypothesis” when he found that death rates of mothers and babies were three times higher in doctors wards (13–18%) compared to the death rates in midwifery wards (2%).

He concluded that the higher rates of infections in women delivered by physicians and medical students were associated with the handling of corpses during autopsies before attending the pregnant women, this was not done by the midwives. Observing the high rate of deaths in hospitals he suggested that it was not wise for doctors to move from working with cadavers or dead bodies to women in labour. He suggested that doctors’ hands were washed between caring for patients. He conducted a study in which the intervention was hand washing and in a controlled trial the mortality rate fell to about 2%—down to the same level as the midwives. Later he started washing the medical instruments and the rate decreased to about 1%.

This seems ludicrous now in our day and age but interestingly despite his various publications of results where hand-washing reduced mortality, Semmelweis’s observations conflicted with the established scientific and medical opinions of the time and his ideas were rejected by the medical community. Some doctors were offended at the suggestion that they should wash their hands. Semmelweis’s practice earned widespread acceptance only years after his death (age 46), when Louis Pasteur confirmed the germ theory.

From “theory” to accepted truth (and back again)

Cleanliness coupled with the germ theory, has indeed since saved many lives and prevented the spread of infection and disease in hospitals, in homes, in communities, and in agriculture. I share this history with you about Pasteur, Beauchamp, Bernard, and Semmelweis’ however because I believe it is important to realize that what seems like a “unsubstantiated” or “unscientific” thinking in one day and age, is often proved correct only a few short decades later.

On his deathbed Pasteur, who once said that germs created illness and that the human body is sterile – basically a blank slate free of germs, then made his final statements admitting and condemning his “Germ Theory” and said, “Bernard was right. The microbe is nothing; the milieu is everything.”

Where does this leave us?

Up until just a few years ago a condition known as ‘leaky gut’ (where intestinal imbalance weakens the gut wall allows particles to pass through the wall into the blood stream) was scoffed at by many within the medical industry. Similarly, despite hundreds of research journal publications on the gut-brain-axis, some still consider it simply “a notion” that intestinal microbiota can influence brain function and state of mind.

It is therefore vitally important we all seek our own understanding of the facets of health. One of these, perhaps the most fundamental of all health principles is good digestive balance, and while cleanliness and avoiding major pathogens is important, most of us have taken the “hygiene hypothesis” too far. Theories such as “too clean for our own good” were ridiculed 10 years ago are now supported by irrefutable research that the body requires constant exposure to milder microbes for power and strength.

There’s much more to consider, and in the next few posts we will discuss which lifestyle factors effect gut balance and increase the passage of foreign particles across the gut wall (including introducing solid foods before this barrier is adequately formed), allergenic foods, a number of drugs (including NSAIDs, antibiotics, chemotherapeutic agents, cocaine) and how bacterial overgrowth can all cause increased permeability.9

Free Download: “7 Ways To Look After Your Micro-Organisms” Infosheet (PDF)

A few points to consider in the meantime…

…And keep your own terrain strong.