Looking a little deeper at a child’s tormoil.

Looking a little deeper at a child’s tormoil. 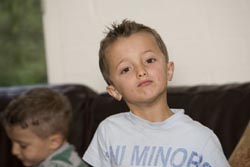 When things feel tricky with the boys Simon and I do a mental check on, “When were they last adjusted?” (believe me -nerve dysfunction and children create an ugly mix) are they immune compromised, we consider their diet, the amount of sleep they are getting (and the quality), are they doing enough physical activity etc, etc. There were no alarm bells here.

Initially these out bursts went a little under our parental radar because our ‘Leo Horse’ (we use all forms of astrology in an attempt to better understand our children) seems to enjoy a little bit of friction in his life. He appears unphased by a bit of ‘argy-barge.’ He will no sooner rant and rave at you for trying to help him focus and hurry-up, then instantly turn around full of smiles, embrace you wholeheartedly, kiss you tenderly and skip out the door.  While I tend to stand there in disbelief -feeling like I have just been slapped around, yet ‘loved-up’ all in the same moment.

Acknowledging our darling Leo tends to default to lashing out well before he decides to become solution oriented, means that sometimes as his parents he misread his needs. Confusion is heightened particularly as he loves ‘to perform’. At seven years of age he repeatedly asks to be taken to drama classes as he would like to be an actor -at night time, when he grows up. “Why at night time?” you may ask, the days are apparently reserved  for being a chiropractor like his parents, well at this stage anyway. Too funny!

At times Nelson can be exhausting and it is tempting to simply refer to him as “Mr Huff and Puff” and walk away but then I remember that I am the adult, the grown-up, the parent, the one with the additional life skills who can see the situation a little broader. I look into his eyes and see the immense courage he has and his deep desire for justice and I realise I need to change may communication strategies. You see Nelson is an extremely clever little fellow which is always an underlying component to his frustration. He’s 10 steps ahead of himself and everyone else for that matter that he can’t understand why no-one appreciates his ‘intentions’ and why they hold him accountable for his ‘actions’.

As his mother I try to remember to ‘breathe’ while he goes into an elaborate explanation of why he pushed his brother over because at first glance one could harshly judge him and yet by holding onto myself I find that eight out ten times he will have a VERY reasonable and rationale explanation for his actions. Unfortunately teachers, grandparents (and myself included one a weary day) won’t allow him to fully express himself which then intensifies his frustration and results in a true Leo outburst and a scolding for his audience. We have four boys and each of them express their emotions in such unique ways (at times the individuality makes my head spin) but nothing calls me to action more then trying to understand their needs.

Early in the week we identified that Nelson was scared, it had been sometime since he had wanted lights left on at night or for either Simon or I to sleep with him. Nelson had had a sleep over at a relatives house and watched a film that was well beyond his years. Had we known we would have definitely requested he did not watch it (in fact we had clearly stated that the day before to the relatives -go figure!) regardless they decided that they could explain that even though it was scary it was after all -only a film. Even though the vampire was ripping their head off, “it was just make-believe, vampires are not real!!” The film was graphic and stressful as lead characters were depicted as being different, unreachable and unloveable etc,etc

Now don’t get me wrong there have been times when I have “started” to let the boys watch something that was inappropriate and interrupted the “movie night” for bed and ultimately regretted embarking on that path.

I too can be prone to misjudgments or be wavered by my children’s requests. If our children do see inappropriate images then we do our best to back-track and help them process the adult themes or the adult ‘stress.’ In this case the images were just far too real. For example Nelson was worried when baby Arlo went quite and went off to sleep that this meant a vampire had come through the window and taken his baby brother.  I tried to talk Nelson through some NLP processes of changing the scary images in his mind, working with him to try and make the scenes ‘funny’, to see them in reverse etc, etc but the bottom-line is he was extremely fretful.

I admit it took Simon and I a little while to really grasp the depth of what was going on for him.

After a week of Nelson being particularly angry with everyone it became glaringly obvious we needed a family meeting to discuss this further. Nelson had just broken a ceiling light and instead of taking me up on cuddle (which I thought was particularly adult of me, considering I could have yelled at him) he decided to yell at Simon and I, storm off and slam the bathroom door.

We then coaxed him out of his isolation tank and all sat down together to find out what  was going on for him. After what felt like hours of ‘active listening’ we got to the bottom of the issue which was that he: wanted to feel listened too and he wanted to feel safe to express himself (as he felt embarrassed about being scared and he was frightened “something was going to happen!) When then we established that these two things would help him feel more loved and help him feel more connected to us all.

I believe the film and the fear that it evoked was the tip of the iceberg. As Nelson’s guardians we had missed his early cues that he needed us to take more time to listen and help him feel more connected to his family right now. Little people go through a feast of emotional issues, as do we, and for whatever reason right now he needed additional time, support, focus and love.

We may have been slow in the up take this time but we have made a good come back by putting many strategies in place this week some of which I discuss in the next 2 blogs.

With love to you and yours,