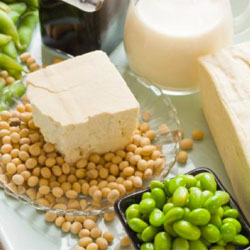 We hear the saying “everything in moderation” quite often and of all things, it’s especially applicable when it comes to food.

Not only is it important to maintain variety in our diets, it’s also crucial to maintain nutritional balance so that we can provide our bodies with all of the vitamins and minerals that it needs to function well.

With all of the information about food and nutrition that is given to us on a day-to-day basis, it can be difficult to decipher what’s true and false within the facts that we are given.

The following blog is Part I of III segments, which will focus on a largely misunderstood area of nutrition – soy products. Are soy products beneficial to our health? Is it true that soy contains high levels of estrogen? Is it safe to consume? All of these questions will be answered over the following three segments of The Truth Behind Soy.

Soy in the Asian culture – myth! Many people think that soy products were first used in the Asian culture, which according to Elaine Hollingsworth is a complete myth. Originally, when the soybean was first introduced into Asia it was used as a rotation crop, which would help regulate nitrogen levels in the soil. Asian people only began using soy in their meals when they discovered how to ferment it and get rid of (most) toxins. Even after fermentation, a toxin that leaches Vitamin B12 from the body still remains in the soy product. B12 is a vitamin found in meat and fish. With this knowledge, Asian people pair soy with fish or meat to counteract the leaching effect.

What other toxins are found in soy products? Where to even start? Let’s get to the root of the problem (pun intended). It all starts in the soil where these beans are planted. Aluminum is the predominant mineral found within the soil of many different crops. Most crops aren’t affected by aluminum, except for the soybean. Soybeans absorb a substantial amount of the aluminum found within the soil. After being harvested, they are put in aluminum holding tanks. So far, this equals a whole lot of aluminum absorption into this supposedly “healthy” product. After this occurs, the complex processing then begins. The following excerpt is from Elaine Hollingsworth’s book Take Control of Your Health and Escape the Sickness Industry, which describes the harsh and chemically dense processing of soybeans into Soy Milk – a much touted “healthy” alternative to dairy:

“In order to obtain that pure-looking, inviting stream of white liquid pictured so appealingly in the ads, many processes are needed. It is necessary to grind the beans at high temperature, and then extract the remaining oils with dangerous solvents, some of which remain in the meal. Then the meal is mixed with an alkaline solution and sugars, in a separation process designed to remove fibre. Later it is precipitated and separated using an acid wash. At each stage, some poison remains in the soy. Government regulators say it’s so small an amount that it doesn’t count.”

And people not only ingest this, but are told soy products are “healthy”? Unfortunately, even health conscious people are unaware of the chemicals and processing methods used in the soy industry. While this is all bad news to consumers, it’s great news to the shareholder’s of these soy companies who are making serious money off soy products. The soy industry is a multi-billion dollar industry that promotes soy as a “healthy” alternative to cow’s milk. Sadly, people are genuinely believing that they are doing wonders for their health – when in fact, according to Elaine Hollingsworth and many other researchers, they are doing themselves a great deal of harm over long term use.

In Part II and III, I will discuss the fact that most soy is genetically modified, I will also share how hormones, including phytoestrogens, and many other harmful elements found in soy are reported to affect the body. I will also share how Soy is one of the most subsidized crops in the United States and why. To me personally, it is hard to understand why this is the case, given the mounting evidence of real health concerns surrounding this supposed “healthy” product.

For now, my personal recommendation is for you to undertake your own research such that you can discern for yourself if drinking soy or consuming soy products is actually good for you. For me personally, I don’t allow soy milk or soy products to pass through my lips.

It’s important to become aware of what we put into our bodies, especially these days when so many nasties are added to our foods. As I like to say, health happens by choice, not by accident and the only way in which you can choose health is by educating yourself as much as possible as to what you are putting both in and only your body.

According to Dr Mercola (one of the world’s most highly regarded wellness practitioners), 90 to 95 percent of soybeans grown in the US are genetically modified.

Why do they genetically modify soybeans?

Soybeans are chemically engineered and tinkered with so that they can survive heavy doses of herbicides without killing the plant itself. Why is this so bad? Read on….

Round-Up is one of the herbicides using on Soy crops. The active ingredient in this nasty herbicide is called “glyphosate”, which according to Dr Mercola, is toxic to human beings and in particular extremely toxic to the placenta in the female reproductive system. The placenta is crucial to providing nutrients from mother to child, and eliminating any waste from the fetus during pregnancy. If the placenta is disrupted in any way, there is a high chance of miscarriage or; the baby could be born with serious birth defects.

There have been many experiments undertaken on the impact of herbicides on our foods. I want to share the following experiment to show just how powerful and toxic GM foods are as a result of being exposed to such herbicides:

“Amphibian embryos were exposed to a tiny concentration of glyphosate (diluted 5000 fold) and showed the following effects:

The findings lend weight to claims that abnormally high levels of cancer, birth defects, neonatal mortality, lupus, kidney disease, and skin and respiratory problems in populations near Argentina’s soybean fields may be linked to the aerial spraying of Roundup.”

If a soybean plant must be genetically modified in order to survive such heavy doses of herbicides, what must we need to do to protect ourselves from the same chemicals?

I urge you all to watch The Alarming Truths about GMO for a deeper understanding as to why GMO foods are so harmful to us.

To me, and this is my personal opinion only….. It seems that the food industry has one concern only, and that’s not our health – it’s profitability in business.

In Part I, I explained the chemically intense and harsh processing methods that soybeans undergo, which leaves the soybean with virtually no nutritional value, but the addition of extra chemicals to enhance the appearance and flavour of soy products.

According to Elaine Hollingsworth, even after undergoing intense chemical processing, there are twelve chemicals that are added to soy products. The most concerning research, however, shows the detrimental effects that phytoestrogens and phytic acid can have on our bodies.

Soybeans contain plant chemicals that have an oestrogenic effect, called phytoestrogens. This occurs in nature to regulate the breeding cycles of animals, and is also used synthetically in farming to produce the same effect.

The birth control pill is the synthetic version of phytoestrogens used for humans.

While some can say this is a “natural” plant chemical, it has been reported to be dangerous at high doses.
According to Elaine Hollingsworth, if phytoestrogens are ingested over time or in high doses, they become anti-oestrogenic, which disrupts the breeding cycle. In very high doses, phytoestrogens are used to treat cancer in the form of chemotherapy.

Isoflavones contain further sub-classes, some including: genistein, coumestrol and daidzein. According to Hollingsworth, scientists have known for years that Isoflavones in soy products can depress thyroid function, which reportedly causes autoimmune thyroid disease and even thyroid cancer. Hollingsworth states that, “as far back as the 1950’s phytoestrogens were bring linked to increased cases of cancer, infertility, leukemia and endocrine disruption” (2007). Not only do phytoestrogens pose a threat to our menstrual and reproductive cycle, according to these studies they also apparently have the potential to cause cancer and organ dysfunction within our bodies.

Phytic Acid: another unfavourable element of the soybean:

“Soy milk – high in calcium and protein!” Sound familiar? So many companies within the soy industry constantly promote soy milk as a source of calcium. Why? Maybe to cash in on people’s faith in the food industry.

What these trusting people don’t know, according to Hollingsworth, is that soy milk contains phytic acid which has been said to leach calcium out of the body. Elaine Hollingsworth stated that, “soy contains more phytic acid than any other grain or pulse, and because phytic acid impairs absorption of all minerals, especially calcium, soy actually strips the body of calcium” (2007). There’s no doubt that thousands, possibly even millions of people around the world drink soy milk every day to get their ‘daily dose of calcium’.

Is there any good news?

Yes! While this all seems like bad news, it’s an opportunity to find natural, safe and organic foods that haven’t been genetically modified, processed or sprayed with herbicides.

When we take the time to look further into the ingredients in our foods, we gain an insight as to what effects different chemical, hormones and herbicides (which are commonly used on our crops nowadays) can have on our bodies.

Although these “healthy” soy products are promoted universally, through education, we can begin to make decisions for ourselves. We are fortunate to have resources such as Elaine Hollingsworth’s book and Dr Mercola’s website plus many other wellness websites available to empower and educate us.
In Part II, I will share how soy is one of the most subsidized crops in the US and give you some more insight into the soy industry.

PrevPrevious Article2 Delicious, Healthy Recipes The Kids Will Beg You For
Next ArticleWhy Soy Gets A Bad Wrap: Part IINext