What Are The Effects of Tech Time?

What Are The Effects of Tech Time?

Thinking of a bit of night-time reading with your iPad? 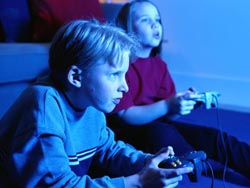 Researchers1 now suggest that artificial light exposure between dusk and the time we go to bed at night suppresses release of the sleep-promoting hormone melatonin, increases alertness and shifts our sleep rhythm to a later hour, making it more difficult to fall asleep.

Do you have the television on most days?

A 2010 study2 found that putting on a TV in the background, as is done in over 40% of homes each day, can negatively affect our children, while a 2009 study3 found that background television decreased both the quantity and quality of parent–child interactions, with two-thirds of parents having shorter interactions with their 12 and 24-month-old children once the TV was turned on.

So what are the other effects of too much time on technological equipment—be that electronic games, computer time or television? This is a topic of conversation our family has revisited again recently.

Whenever there are big family decisions to be made (i.e. when our boys feel as strongly about something as we do) we like to encourage the process of increasing our family health literacy on that particular topic.

Everyone researches or considers the pros and cons and then we brainstorm some solutions to hopefully meet individual family member’s needs and desires.

Over the last few weeks our boys have been unrelenting, asking us, “Why can’t we go on our DS’s [hand-held game console] on week days? Other kids don’t even have to ask their parents to use their DS’s, why do we have to ask every time?” Or “Why can’t we stay on the computer for longer?”

One afternoon, exasperated, I said, “Okay ENOUGH already! We need a family ‘tech’ meeting. How about we take a week to find information on the up side and the down side of regularly using tech equipment and then in one week’s time we’ll weigh it all up.”

To this suggestion my eldest three boys smiled widely at each other and nodded.

I continued, “Let’s look at all the factors involved and I’m super keen to hear what you find because Mummy has already been doing her own research on this topic.”

With this they looked at each again and their cocky smiles began to fade somewhat.

The reality is that we are all highly influenced by technological equipment. At times I look around our home, and the world at large, I am amazed by just how much technology we are plugged into every day. TV’s, computers, laptops, mobile phones, game consoles; we are spending large amounts of our days looking at screens!

Of course, technological gadgets can have great practical and entertainment value and are arguably indispensible in many ways. But it is worth considering whether our time spent using them might be taking an unrecognised mental and physical toll.

Our children are learning from and experiencing technology from a very young age and sadly they are also a targeted market for media companies. Our children’s attitudes to media and technology will also reflect our own actions as adults, where switching on a TV or computer is often our own way of switching off. Children observe our habits.

As a family we discussed the “benefits” that the boys put forward including: their desire to develop their social media skills, time to themselves, entertainment opportunities, etc, etc… and we all agreed that these were valid suggestions.

We then moved on to discuss some of the research that our family found confirming the need to keep technological time in-check:

Is Your Baby Plugged In?

Interestingly, 40% of parents believe that children’s programs may benefit their infant or toddler13 and closer to 60% believe that educational television is ‘very important’ for their child14. However, many of us are unaware of the downside.

A survey of over 1,000 parents of 2 to 24-month old children15 found that for each hour per day that an infant watched baby DVD’s (such as ‘‘Baby Einstein’’ or ‘‘Brainy Baby’’), there was a significant decrease in the pace of language development. Whereas reading with a parent each day was associated with a 7-point increase in language scores, each hour of daily baby DVD viewing was associated with a 17-point decrease.16

This research suggests that whilst infants learn quickly about their world by watching parents or caregivers, much less appears to be learned when this information is presented through audiovisual media. The fact that videos attract the attention of infants does not appear to be enough to induce learning.

In many respects, too much screen time may be doing our children harm. Although we marvel at having a world of information at our fingertips, it is worth keeping in mind that we need a balance between these technological domains and the physical world. As the research suggests, technology for educational purposes does have its limitations and may even be doing more harm than good, especially in the case of our infants and toddlers. In addition to this, time spent watching and listening to media is also time spent away from other activities such as reading and play that hugely contribute to social, emotional and cognitive development.

The American Academy of Pediatrics reflects this concern with their recommendation that pediatricians should urge parents to avoid screen time for children under the age of 2 years17. This may be sound advice. By switching on, we may be switching off more than we bargained for.