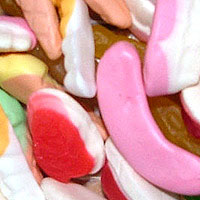 One of the boys had a friend’s birthday party the other day and, as to be expected, when I collected him his hands were loaded with a piece of cake and a bag of lollies. He was of course grinning from ear to ear. He was grinning because he knew how the next scene would go down.

Unfortunately the cake was covered in blue and pink icing with edible glitter and each lolly was so brightly coloured that as we entered the car, I found myself eager to growl like a dog protecting a precious bone.

“Mum, mum look at these, look at these lollipops, there’s one, two, three!!!.. and there’s loads of snakes and squishy ones. Look at them Mum.”

So I forced a smile and said “Ah hah, so do you remember the deal we made sweetheart?”

With a sigh he replied, “Yes, Mum”

“So pick out two lollies buddy -remember the plain coloured ones will have less e- numbers and that will mean that you’ll go less coo-coo in the head. Now I’ll look after the rest of these. Okay ?”

You see, lollies as such for the boys are very rare, and they delight in being able to pick and eat two. If they were offered lollies every week then no doubt I’d be in for a serious struggle. Now don’t misunderstand me, our children are indulged with some processed grocery items from time-to-time, but they certainly do not need a whole bag of junk.

In the five years we have been going to kids’ parties, not once after the initial “party-day” have the boys asked about their party bags again. Once a friend staying asked what happened to the party bag and I said that I threw it in the bin because they were full of yucky chemicals. She was shocked, but the boys are pretty used to this scenario now.

Perhaps one day the boys will rant and rave about having their party bags thrown out, but hopefully I’ll be able to distract them by offering them some organic chocolate or another high quality, truly indulgent item.
Lollies are not what they use to be. Artificial colourings, flavourings and additives are just that – ARTIFICIAL CRAP!!!

Studies from the UK show that 79% of hyperactive children are allergic to the yellow food colouring tartrazine, a coal dye which is usually shown as the number 102. Potential health effects include aggressive behaviour, headache, insomnia, hay fever, asthma and hyperactivity.1 Tartrazine is banned from foods in Norway and is heavily restricted in Austria, Sweden and Germany. Sadly this colouring is still approved and frequently used in the US and here in Australia. It is found in soft drinks, cereals, confectionery, snack foods, cordials and oral medications.2

Highly processed grocery items are loaded with chemicals and should not be mistaken for real food.  This junk is completely the wrong product to be offering young healthy vibrant children – whose bodies are dynamic, growing machines. It’s like putting petrol into a diesel motor, or leaded petrol into an unleaded car.

It’s just wrong. Quite literally these chemicals poison our children.

So what’s all the fuss about E- numbers?? Most people, when they think of additives – think of the E numbers they find when they read a products ingredients list. These generally include additives such as colours, flavourings, flavour enhancers, bulking agents, glazing agents, and preservatives. Obviously their intended purpose is to enhance flavour, appearance and preserve the shelf life of these products. Aside from Vitamin C and E (which have E numbers associated) nearly all other E numbers we can do without. This is actually easier than we think, as long as we minimize highly processed foods.

E numbers can effect you/ or your child’s ability to get off to sleep:

Sometimes, as parents, I have to wonder if we really consider the effects of the foods we give our children. The other night we took the ‘big boys’ to see the show “Walking with Dinosaurs” and there was a mum behind us who had prepared a lolly bag in advance for each of her children (smart move considering the cost of food at Vodafone). As the kids started munching their way through their bag of highly refined sugar their noise level started to escalate. As more and more parents turned to look for the culprits, their mother hissed louder and louder, demanding that they be quiet. How can we give children a bag full of sugar and not expect that they will not become loud and obnoxious?

So on all accounts – for smoother sailing- its wise to avoid e- numbers as much as you can.

Sending you every blessing for good health,