Safest Ways to Fly When Pregnant

Safest Ways to Fly When Pregnant 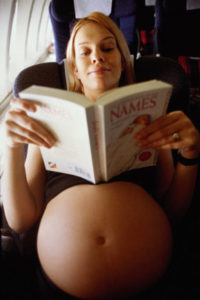 Some of you maybe wondering what on earth I mean by safest ways to fly, surely the only risk with flying is the unlikely event of falling from the sky ??

Few of us consider the effects of COSMIC RADIATION FROM FREQUENT FLYING and the simple steps that may help to reduce our exposure.

Cosmic radiation is a particular problem for those who fly regularly. I would also suggest that women who are pregnant and flying internationally (particularly if flying regularly) take note of the tips below.
Cosmic radiation is the radiation found naturally in our cosmos, created by the sun as microwaves, gamma rays and a vast array of particles.1 Our atmosphere provides an effective radiation shield but at aircraft-cruising heights the ambient dose rate from cosmic sources is between 50–100 times the dose found at ground level.

“It is surprising how few members of the public are aware of this cosmic radiation,” commented Dr Michael Clarke of the National Radiological Protection Board.2

Studies have been issued on aircrew who, with the exception of astronauts, receive the highest level of radiation exposure. The Journal of Occupational Environmental Medicine published three papers discussing the incidence of cancer among pilots and cabin crew. The increased incidence of malignant melanomas and the risk of breast cancer were noted.6

Official figures from the National Radiological Protection Board (NRPB)7 show an increased risk of acute myeloid leukaemia and also an increased incidence of skin cancer. Another US study8 on biological dosimetry examined whether persistent chromosome aberrations could be linked to cosmic radiation exposure, with conclusions stating that further investigation was warranted. As the author commented, there is a need to obtain as much information as possible about exposure and the potential contributing factors before firm conclusions can be drawn.

Pilots analysed were estimated to to have flown about 5000 hours and researchers estimated the crew receive up to 9 mSv (units of radiation exposure) a year. A frequent flyer travelling about 100 hours a year would receive, in addition to man-made radiation, 0.4 mSv from cosmic radiation.9 As a comparison, a chest X-ray is estimated at 0.02 mSv.10

These statistics help us to appreciate the seriousness of cosmic radiation, even with single international and domestic flights, particularly during your first trimester. Many doctors and IVF clinics give explicit advice to not fly during your first 12 weeks, as the effects of radiation exposure and possible links with miscarriage, while not definitive, are best avoided.

The following tips are suggestions gathered from various literature and unfortunately their effectiveness has not been tested to date, however every little step we can take to minimise exposure to radiation is worth considering…

1) If you are planning to fly internationally you can log on to the Space Environment Centre for an update on solar flares (www.sec.noaa.gov).

2) There are homeopathic preparations that can offer some protection when flying. These have been shown to be safe to take during pregnancy so ask your homeopath to prepare a remedy for you. Please contact me if you need specifics on this remedy, otherwise Health World Limited in Eagle Farm Qld have a pre-prepared remedy.

4) Some literature suggests that you can cover your lower abdomen with bags of Epsom Salts during the flight.11

5) Enjoy the Detox bath outlined below

Pregnant or not – DO YOU FLY REGULARLY?
Some authors suggest that apple cider vinegar
baths help restore the body’s natural pH and
may help combat radiation exposure.