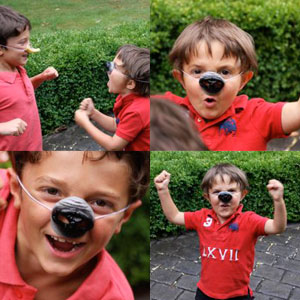 These pictures depict how happy children can turn beastly (yes, even my children!) when fed too much sugar or artificial sweeteners.

Fortunately in this case I know these young “animals” were just playing around rather than reacting to a chemical onslaught, but parents consistently email me about what types of sugars and sweeteners I use in my household. Here are my preferences and some information regarding the effects of common sugars and the different types of sweeteners that are available…

Every day we are hearing more and more about the dangers of eating highly refined foods, particularly highly refined sugars. Excess intake of these sugars (especially high fructose corn syrup and table sugar), have remarkably detrimental effects on the body, and have contributed to the obesity and the diabetes epidemic we are seeing worldwide today.1

It is reported that more than 17 million Australians are overweight or obese – a startling fact considering that the entire population of Australia is only 22.8 million2. If we look at obesity alone in leading industrial countries, 2009 figures indicate almost a quarter of adults in both Australia and the UK are obese while in the US more than a third (35.7%) of adults are obese3,4.

The latest information from Monash University5 suggests that if we go on as we are, by 2020 80% of all Australian adults and a third of children will be overweight or obese, and that obesity has overtaken smoking in being the leading cause of premature death and illness. How did we arrive at this point of poor diet and poor lifestyle choices resulting in obesity and chronic disease?

Why Sugar Is Physically Addictive

Sugar has a similar effect on the brain to pain-killing drugs like morphine and other opiates (such as heroin). These types of drugs produce an almost instant feeling of pleasure, calm and satisfaction, making them incredibly addictive. When the food manufacturers figured this out, they began producing foods full of sugar. Back in the 1950s, sugar would mainly be found in homemade cakes, but now it’s pumped into almost all processed foods (such as breakfast cereals) and foods aimed at children. As a result, we’re all more addicted and fatter than ever.

Remember that most packaged foods contain sweeteners along with other additives that you really want to avoid if you want a slim waist. Learn to read labels and avoid anything fake or toxic-looking. As a rough guide, here are some of the things you should be looking for:

The Impact Of Sugar

Australians consume an average of 53kg of sugar each year (approximately 29 teaspoons of added and natural sugar each day), and 75 percent comes from the packaged and convenience products we eat and drink6.

Refined sugars should be avoided for several reasons. They raise your insulin levels and, as a result, can depress the immune system — weakening your ability to fight disease. They also cause weight-gain and promote storage of fat. Finally, refined sugars provide you with no vitamins or minerals, so in order for them to be metabolized, they draw on the body’s reserves of vitamins and minerals, depleting your body’s nutrients.

High Fructose Corn Syrup (HFCS) is the perfect example of an extremely processed and refined sugar. In short, high-fructose corn syrup is an unnatural product that is a very, very sweet, refined cornstarch. This manufactured substance is sweeter than and digested differently than sugar. The body processes it directly through the liver, subsequently storing it as fat. There is no nutritional value in HFCS giving you only empty calories to digest. Lastly, this sweetener may be linked to several diseases including type 2 Diabetes.18

Solution: Opt for only natural sweeteners, foods that are naturally sweet (fruit or honey) or natural herbs, such as stevia.

Aspartame/Saccharin/Sucralose/Phenylalkaline and other artificial sugars which have been created as sugar replacements are, quite simply, bad for you. They are unnatural, processed derivatives of food and/or chemicals that aren’t natural for us to digest. They can cause havoc on your metabolism and your energy levels. Further, there is strong evidence that these chemicals are toxic and may cause cancer, as well as other diseases.19

In avoiding refined sugars and chemical sweeteners, do you have to forego your favourite sweet foods?! Not altogether. Wholesome foods can be naturally sweetened with more nutritious alternatives, and in moderation they have a place in a balanced diet. There are a number of fabulous alternative sweeteners available — some that you’ll be familiar with and others you may not yet have heard about.

Below I look at a couple of the ‘tried and true’ options — like raw honey and maple syrup — and some of those with stranger names like yacon syrup and mesquite. One thing to keep in mind is that any form of sugar will be concentrated, and that moderation really is the key.

In our household, our preferred sugars or natural sweeteners are: coconut sugar, agave, honey, maple syrup, mesquite, dark brown sugar and molasses. Very rarely do I use caster sugar (about once a year for my groom, as one of his favourite cakes is Lemon Meringue Pie). We also rarely use icing sugar.

Whilst there are numerous different types of sugar (easily identified because they all end in “–ose”), the primary ones are sucrose, glucose and fructose. The more a sugar undergoes refining, the more minerals are lost and the quicker it will be absorbed straight into the bloodstream without giving you any nutritional benefit. The GI or glycemic index measures exactly this; how rapidly a carbohydrate affects your blood sugar levels.

Carbohydrates that release glucose very quickly into the bloodstream rapidly raise blood sugar levels and have a high GI value, whereas those that are broken down more slowly and are gradually released have a lower GI (providing sustained energy rather than a sharp energy burst and crash). Consider the following reference guide7:

Honey has been consumed for thousands of years and pure unprocessed honey provides wonderful health benefits. Raw honey contains around 18 essential and non-essential amino acids which allow our body to build critical proteins, along with antioxidants, enzymes, minerals, and vitamin C and B8. Most commercial honey (in fact any honey that is clear and sparkling) has undergone a heating process that destroys some of these wonderful health properties. Raw honey is high in fructose (around 70%) and should be used in moderation. Pure honey has a GI of around 589.

Maple syrup, the sap from the Maple tree, is another natural sweetener that has been used for centuries. It is particularly rich in potassium and calcium and contains other trace minerals such as magnesium, manganese, phosphorous, malic and citric acids, as well as some amino acids. It is 88-89% sucrose, with fructose and glucose making up the rest10, with a GI of around 549.

Yacon is a native plant of the Andean region cultivated for its roots. Unlike most edible roots, the carbohydrate in yacon is made up of 40-50% fructooligosaccharides (FOS) which are absorbed and digested differently from simple sugars. FOS have a low caloric value, are probiotics that improve digestion and bowel function, and have been shown to reduce blood lipid and glucose levels in diabetics11. Yacon syrup reportedly has a GI rating of 112.

Agave syrup has received a lot of bad publicity in recent times, particularly with reference to processing and high levels of fructose. But issues surrounding agave would seem to depend somewhat on the type of agave you use. There are two different types of agave syrup commonly sold — one from a root, Agave Tequilana (blue agave), and the other from a large wild cactus-like plant, Agave Salmiana (white agave)13. The two are processed differently. Loving Earth produce their white agave with minimal processing, at below 40ºC using a vacuum evaporator and certified organic vegan enzyme. It does contain high levels of fructose (70-75% fructose just like honey, although other reports say 49%14) and should therefore be eaten in moderation. It is reported to have a low GI of about 307. Whereas high fructose corn syrup stores its energy as starch, agave syrup stores its energy as insulin, which feed the probiotic bacteria in our digestive system15.

Mesquite has been used by desert dwellers as a staple food for hundreds of years, and contains good quantities of protein, calcium, magnesium, potassium, iron and zinc, and the amino acid lysine12. It tastes sweet and has a hint of caramel that works well in smoothies and cacao or maca based drinks. Mesquite has a low GI of 2512. HINT don’t use too much as it has a fairly strong taste.

Coconut sugar is produced by collecting the sap (nectar) of the flowering part of the coconut 16 and has a long history of usage in South East Asian cooking and herbal medicine. It is actually thought to be the most sustainable sweetener in the world7. Coconut sugar has a rich toffee-toned flavour and is sucrose-based, with a low GI rating of 357.

Stevia comes from South America, and is 300 times sweeter than sugar (only a pinch of powder required to replace a spoonful of sugar) and contains virtually no calories. It can sometimes taste a little bitter, but works well in salad dressings, smoothies, whipped cream, puddings, and pie crusts. Green stevia powder is the unprocessed whole form of stevia leaf whereas white stevia powders and stevia liquids have been processed17.

PrevPrevious ArticleVitamin D — How much do you and your baby need?
Next ArticleSafe Cookwear for Your HomeNext