Are all processed meats and poultry unhealthy?

Are all processed meats and poultry unhealthy? 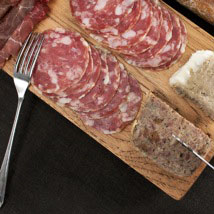 Have you ever wondered where ‘processed meats’ fit along the health scale?

I have questioned these foods as I’m married to an Italian who likes to occasionally indulge in prosciutto and salami. Sometimes he even regresses to his childhood and makes our boys salami and eggs.

Being fond of research I have stumbled across papers in recent years outlining processed meats and the nitrates they contain – being potentially linked to a number of health issues.

Perhaps you are aware of this and consciously purchase organic or ‘all natural’ processed meats.
Questions then arise when some literature suggests that the effects of ‘natural nitrates’ (found in some foods and used in replace of ‘artificial nitrates’) are equally as harmful because they are used in higher quantities? Oh dear – now things get confusing!!!

Determining whether or not nitrates are toxic is certainly not straight forward; they are naturally found in many health-promoting foods such as vegetables, fruit and grains and some recent studies suggest that nitrates themselves may be beneficial for health.

So, where does this leave us when considering which foods to buy?

Let’s look at the concerns and the benefits of nitrates and then you’ll be able to make a consumer choice that is informed.

Sodium nitrate is a naturally occurring mineral used as a food additive to preserve the flavour and colour of cured meats and poultry and extend their shelf-life. Sodium nitrate is used to make the food ‘unattractive’ to the bacteria that cause food spoilage by removing the oxygen and moisture needed for their survival.
Meats such as sausages, ham, bacon, strass, processed poultry typically contain added sodium nitrate. It is also added to the brine of corned beef to produce the classic reddish colour (without it corned beef turns out gray). Sodium nitrate can be identified on labels as potassium nitrate (E 251), sodium nitrate (E 252), or potassium nitrite (E 249)1.

Much controversy surrounds the use of this added preservative because once ingested, some research has suggested that sodium nitrates break down into compounds called nitrosamines that may potentially be carcinogenic2.

What happens when we eat nitrates? Nitrate itself is actually a compound with low toxicity 3 and is a normal component of the human diet. Once ingested, around 4–8% is converted by bacteria in the mouth and gut into nitrite, and nitrite can react to form carcinogenic nitrosamines4.

Such carcinogenic nitrosamines can be formed from the reaction of nitrite with secondary amines under acidic conditions. Certain conditions of the stomach can increase the conversion of nitrate to nitrite, specifically when the pH of the gastric fluid is high enough (over 5) to favour the growth of nitrate-reducing bacteria5, thereby increasing the levels of nitrites.

This process is of major concern for infants, whose gastrointestinal systems normally have a higher pH than those of adults. Or adults prone to acidity.

What are the potential harmful effects?

Nitrates themselves are relatively nontoxic.

One author states: “In addition to the fact that nitrite can cause infantile methemoglobinemia….nitrite is suspected of causing gastric cancer and other malignancies”3.

This sounds a little confusing but stay with me as awareness about reported side-effects may help you decide whether nitrates are right for your family or whether they may need to be limited.

The American Cancer Society and National Academy of Sciences (REF), conclude that intake of nitrate or nitrite from diet or drinking water is not associated with cancer in humans 4.

Adverse health effects from nitrates may result from
– a complex interaction of factors including the amount of nitrate ingested,
– the amount of any inhibiting substances also ingested,

whether or not an individual has medical conditions such as chronic inflammatory disease9.

What may be the beneficial effects?

Certainly, the addition of nitrates to food plays an important role in preservation.
– It’s sodium nitrite that actually possesses the antimicrobial properties that make it a good preservative. In particular, it prevents the growth of Clostridium botulinum.

Clostridium botulinum produces botulism, is a very nasty bug and causes paralytic illness that can lead to respiratory failure. The botulism bacteria is unlike any other microbe in that it requires an oxygen-free environment to live. By curing meat with sodium nitrate, it prevents the growth of this bug.

Nitrates and Nitrites in food

As outlined, processed and cured meats contain added nitrates so to do 80–85% of vegetables 3. This is because anything that grows from the ground, draws sodium nitrate out of the soil because it is a naturally occurring mineral.

Veggies such as spinach, lettuce, and beetroot contain high concentrations, and eating them may lead to a higher level of nitrites than the acceptable daily intake (4.2 mg nitrite/d) set by the World Health Organisation 10. Further to this, 200 grams of spinach can raise nitrite levels to 72mg/L, far above the EPA standard for drinking water of (4.4 mg nitrite/L).

Sometimes these vegetable sources of nitrate are used in a concentrated form in some “natural”, “organic” or “nitrate-free” brands – unfortunately this can be misleadingly as they MAY IN FACT contain MORE sodium nitrate than their conventional counterparts.

Putting it all together

Recent studies have shown that green leafy vegetables (which contain nitrates) are among the foods most protective against coronary heart disease and ischemic stroke risk2. Does this lend weight to the argument that nitrates may be good for us as some researchers believe? Might the benefits of these foods be due to the nitrates contained within them?

Alternatively, could it be that the inherent nutrients in vegetables prevent nitrates from having deleterious effects? As pointed out by one researcher, vegetables are not only sources of dietary nitrate, they are also sources of antioxidants, known to inhibit the formation of carcinogenic nitrosamines9. Recent studies into antioxidant-rich foods show that antioxidant levels continue to build up 3-4 weeks post consumption, and could inhibit nitrosamines from forming across a large period time9. Vitamins have also been demonstrated to lower levels of oxidized lipids that can result from nitrosamines9.

All in all, the European Commission Scientific Committee Contaminants Panel (CONTAM) determined the risks and benefits to consumers from nitrates in vegetables and concluded that the benefits of eating veggies far outweigh the potential risks2. Importantly, the take home point is – fresh vegetables, unlike processed foods, contain other nutrients that may help to mediate the effect of ‘natural’ nitrates.

Whilst it’s hard to be definitive on the nitrate issue in processed meats etc, we truly believe that we are best to minimise ALL processed foods (even“ all natural and organic”) that we eat.