This is a blog shared directly from the EWG website.

People with asthma can be exceptionally sensitive to air contaminants, including those in ordinary cleaning products.

In an asthma attack, the smooth muscles that line the airways to the lungs suddenly become swollen and inflamed and tighten up, obstructing or blocking the flow of air and causing chest tightness, wheezing, breathlessness and coughing. In people with the disorder, various circumstances can trigger an attack, including exposures to irritating or allergy-causing chemicals, stress, or exercise.

This chronic disorder has become increasingly common in recent decades for reasons that remain unclear. According to the U.S. Centers for Disease Control and Prevention, overall asthma prevalence in the United States increased from 7.3 percent to 8.4 percent from 2001 to 2010, with even higher prevalence among children.

Scientists and doctors believe that asthma may be caused by a combination of environmental and hereditary factors. Various health organizations and government agencies have been investigating the association of the disorder with the inhalation of certain chemicals, often in occupational settings. Authoritative bodies such as the Association of Occupational and Environmental Clinics have compiled lists of chemicals, known as asthmagens, that have been reported to cause asthma.

A 2009 study led by Jonathan Bernstein, a physician and leading asthma and allergy researcher at the University of Cincinnati College of Medicine, measured worsening symptoms in asthmatic women after they had completed housecleaning tasks (Bernstein 2009).

EWG’s assessment of more than 2,000 cleaning products found that 438 contain at least one chemical that the AOEC has identified as an asthmagen. 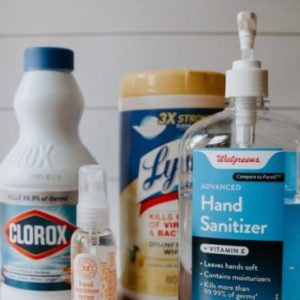 Asthma in those who don’t typically have asthma?

A growing body of evidence suggests that using cleaning products can also cause asthma to develop in healthy people.

A 10-country study of more than 3,500 individuals who were initially free of asthma found that nine years later, those who used spray cleaners at least once a week to clean their homes had a 30-to-50 percent increased risk of developing asthma during the study period (Zock 2007). This association was linked primarily to commonly used spray products such as air fresheners, glass cleaners and furniture cleaning sprays. The risk increased the more often people used sprays or the greater the number of different sprays used.

The research team calculated that with the widespread use of spray cleaners and the high level of asthma risk, one in seven cases of adult asthma could be attributed to the use of these products (Zock 2007).

Cleaning products and the impact on children.

Preliminary findings also suggest that fetal exposure to household cleaning supplies may affect respiratory health. In a series of studies on parents and children, scientists at three British universities determined that children born to women who frequently used cleaning supplies in their homes while pregnant had a higher risk of persistent wheezing and reduced lung function (Sherriff 2005; Henderson 2008).

The increased risk of these respiratory symptoms persisted for at least eight years after in utero exposure and was independent of many other indoor air pollutant exposures and potential confounding factors.

Asthmagens: ingredients that can cause or worsen asthma

* While not asthmagens themselves, these ingredients release formaldehyde, which is a recognized asthmagen. 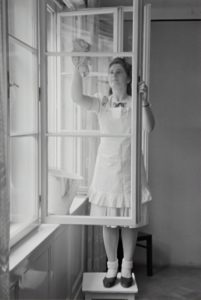 Extensive studies show clear links between on-the-job exposure to cleaning supplies and the development of asthma in workers who had never shown previous signs of the disease (Medina-Ramon 2005, 2006; Rosenman 2006; Arif 2009; Quirce 2010; Zock 2010).

A 2003 study led by Kenneth D. Rosenman, a professor of medicine at Michigan State University, found that 12 percent of the work-related asthma cases in four states were associated with exposure to cleaning products (Rosenman 2003). Four-fifths of the workers reporting work-related asthma linked to cleaning supplies had never suffered from the condition previously. Twenty-two percent of those afflicted worked as building custodians. In addition, seven of nine extensive epidemiological studies from several nations found an increased risk of asthma for people working as cleaners, with rates of asthma and asthma-type respiratory symptoms 1.5-to-2.5 times higher than in the general population (Rosenman 2006).

Chemicals can cause or worsen asthma

Several ingredients that are common in cleaning supplies are classified as asthmagens, meaning that they can cause asthma to develop in otherwise healthy people. In 2009, an EWG evaluation of 21 common school cleaners found that six of them emitted at least one of three common asthmagens into the air – formaldehyde, methyl methacrylate and styrene – when they were used as directed.

Many types of industrial chemicals can cause asthma. Those of greatest concern in cleaners include:

Many harsh acidic (low pH) or basic (high pH) cleaners aggravate asthma symptoms because they irritate the lungs. Moreover, if improperly mixed, bleach and acidic or ammonia-based cleaners can react to form extremely high concentrations of chlorine gas, which can cause a person to develop asthma after a single intense exposure (AOEC 2012). Other chemicals, like quats, bleach and ammonia, can cause asthma through allergic reactions that develop slowly after frequent, long-term exposures to lower concentrations of the substances (Bernstein 2006; AOEC 2012). 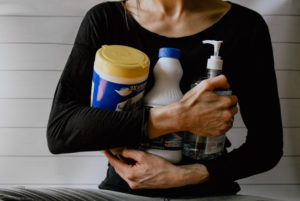 Many ingredients in cleaning products evaporate easily, and some can react with other contaminants in the air to produce new, asthma-inducing chemicals. Some of these volatile organic compounds, or VOCs, have been measured at levels up to 100 times higher than those found outdoors and can exceed safety limits established for industrial facilities (Nazaroff 2006; EWG 2009; Bello 2010).

Pine- and citrus-based cleaners contain a class of volatile chemicals known as terpenes, which indirectly increase asthma risks. Terpenes may also be found in air fresheners and cleaners that contain other essential oils for fragrance. They react with ozone to form formaldehyde, an asthmagen and known human carcinogen.

The California Air Resources Board recommends that consumers avoid using citrus and pine oil cleaners, especially on warm, smoggy, high-ozone days (CARB 2008). Ozone-forming volatile organic compounds and ozone-reactive terpenes from pine and citrus oils may act together to increase formaldehyde air pollution. The combined effects on air quality of cleaning products that release these chemicals have not been studied and are a cause for concern. 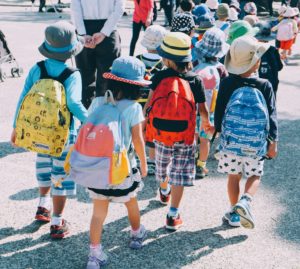 Childhood asthma is at an all-time high

Childhood asthma is more common in African-American, Latino and low-income communities (CDC 2006; Babey 2007; Meng 2007). More asthma sufferers are being hospitalized than at any other time in American history, mirroring the documented trends in asthma prevalence (CDC 2006). The annual direct medical cost of asthma in children and adults for the year 2007 was estimated at $37 billion nationwide (Kamble 2009). Reducing in utero and childhood exposures to cleaning supplies that pollute the air with asthmagens and lung irritants may constitute an important investment in a healthy future. 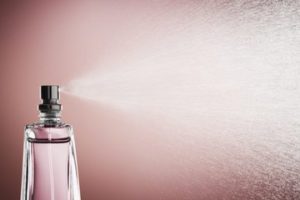 Some respiratory allergies may be set off by fragrances, which are complex chemical mixtures commonly used to scent air fresheners and cleaners, personal care products, and other consumer goods.

Fragrances are collectively considered among the top five allergens in the world (de Groot 1997; Jansson 2001). They can also trigger asthma attacks (Norback 1995; Millqvist 1996).

Researchers at the Universities of Washington and West Georgia who surveyed everyday Americans’ experiences with fragranced cleaning supplies found that nearly one in five suffered headaches, breathing difficulties or other problems when exposed to air fresheners (Caress 2009).

A study led by Alexandra Farrow of Brunel University in the United Kingdom linked air fresheners in the home to a higher incidence of diarrhea and earaches in infants and headaches and depression in their mothers (Farrow 2003).

A Swiss study published this year found that the use of air freshening sprays 4-7 days a week was associated with reduced heart rate variability, a marker of autonomic cardiac dysfunction (Mehta 2012). Because manufacturers routinely refuse to list individual ingredients in fragrances, independent researchers have difficulty conducting targeted studies to identify which fragrance chemicals raise the greatest concerns.

This blog further identifies the importance of chemical-free cleaning products not just to avoid asthma but for general health and well-being.

Chemicals To Avoid In Self Care And Home Care Products

Triclosan: Is It Banned or Not Banned?

25. European Union. 2008. Decision No 1348/2008/EC of the European Parliament and of the Council of 16 December 2008 amending Council Directive 76/769/EEC as regards restrictions on the marketing and use of 2-(2- methoxyethoxy)ethanol, 2-(2-butoxyethoxy)ethanol, methylenediphenyl diisocyanate, cyclohexane and ammonium nitrate. Published in the Official Journal of the European Union, L 348, on December 24, 2008.