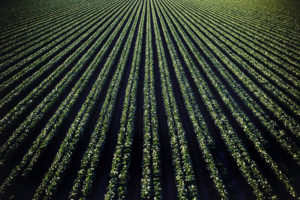 Glyphosate: Does this Sound Familiar to Anyone?

Whether you know what it is, or you don’t, you can be pretty sure, unfortunately, that you have ingested it. No matter how cautious we may be about our diet, glyphosate sneaks into our lives. Glyphosate is a herbicide, and it is the main component in Roundup®, the most widely used herbicide in the world.

Pesticides and herbicides are not new. Most of us know to wash our produce well before using, or we know the importance of buying organic products, but what we may not really know is the health impact that pesticides can have. Let alone where glyphosate fits in?

Roundup® has long been produced by a company called Monsanto (since acquired by Bayer) and keeps weeds from overtaking crops. Roundup® is so powerful that back in the day, not only would it have killed off all the weeds, but the crops as well. With the incredible scientific ‘advancements’, companies worked long and hard to overcome this problem and now we have ‘Roundup®-ready’ crops, aka. GMO foods. 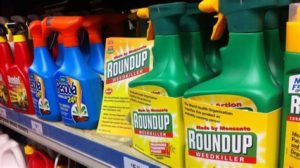 Rather than getting rid of the weeds before planting crops, Roundup® gets sprayed over both the crop and the weeds, and its survival is genetically enhanced from there on in. Because of this approach, crops soak up chemicals like a tall glass of water on a hot day and as weeds become more resistant to herbicides, farmers have to keep adding more and more glyphosate onto their crops to keep the weeds at bay.

Glyphosate by itself is harmful, but when formulated into Roundup®, there are numerous adjuvants that allow glyphosate to get through barriers and to places in the body that it could not get to on its own. One paper showed that Roundup® was 125 times more toxic than glyphosate by itself.6

Adjuvants in pesticides are generally declared inert, and for this reason, they are not tested in long-term regulatory experiments. It is thus very surprising that studies show that they amplify up to 1000 times the toxicity of their active principle in 100% of the cases where they are indicated to be present by the manufacturer.

According to the authors of the paper, ‘Major Pesticides Are More Toxic to Human Cells Than Their Declared Active Principles’1,

“We have shown, the role of adjuvants is to increase active particle (AP) solubility and to protect it from degradation, increasing its half-life, helping cell penetration, and thus enhancing its pesticidal activity and consequently side effects. They can even add their own toxicity. The definition of adjuvants as “inerts” is thus nonsense; even if the US Environmental Protection Agency has recently changed the appellation for “other ingredients,” pesticide adjuvants should be considered as toxic “active” compounds.”

There are more than 40 countries that have at least some kind of restriction or ban on glyphosate worldwide, however, the US, Canada, the European Union, Australia, and NZ are sadly not even looking close to being on that list.

Nowadays, we can find glyphosate in a huge amount of our foods, with cereals tending to have a dangerously high amount, including Nature’s Valley products, Cheerios, and other well-known brands. Wheat tends to really take a hit with the glyphosate levels, which includes many brands of pasta, pizza, cereal, oats, even corn, but it’s not just wheat. There are nuts and vegetables, sugar, wine, even tampons, and clothes that have traces of glyphosate. Supposedly, nothing is safe. Roundup® is sprayed around parks, schools, and communal garden areas, where we willingly send our children into a toxic minefield.

By ingesting these products for years, tests have found the rate of glyphosate in air, water, and rain samples to be between 60-100%. Urine have also been found (especially dwellers in large US cities) and the blood of pregnant women and their unborn babies.2 The effects of pesticides are manifest particularly in water catchment areas. However, levels of glyphosate and the neonicotinoid insecticides are not monitored in surface water, groundwater, or drinking water.

Glyphosate is clearly very prominent. Let’s explore exactly what it does.

Why Should We Be Concerned? 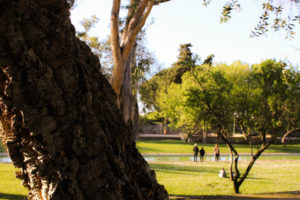 Monsanto has argued for decades that glyphosate is harmless to humans because it inhibits the Shikimate pathway in plants. As far as science tells us to date, human cells do not go through the shikimate pathway, but what scientists are now realising is that we do have a very important part of us that does… our gut bacteria.

Our gut bacteria supply us, amongst other things, with essential amino acids (AAs) because no matter how clever our bodies are, they cannot create AAs, this is why they are ‘essential’. The toxic effects of glyphosate and the adjuvants in Roundup® increase over time, and there are very few studies done by Monsanto that are long term. Roundup® has been approved for no side effects during a 90-day period, but it has been found that there are huge effects to health within literally the month after the 90 days are up, namely large tumours in mammary glands, livers, and kidneys of animals.

There have been multiple observances of animals in slaughterhouses with vast differences between GMO and non-GMO fed animals. The GMO fed animals tend to smell foul, likely due to the state of their gut bacteria, but also have strange discolouration on their insides, malformed livers, and paper-thin intestines3. The US can no longer use pig intestines for sausage coating because they are not strong enough and must import the intestine all the way from New Zealand!

So, glyphosate is taking its toll on the animals, but what about the environment as a whole?

Glyphosate functions as an antibiotic, in fact, it’s the most abundant antibiotic on the planet. It is also an anti-parasite, and anti-sickle cell organism. Therefore, when spraying over 4.5 billion pounds of it onto soils, water systems, and the atmosphere, the effects can be catastrophic.

With antibiotics in the soil, we lose the incredibly complex matrix of the earth right down to the biome level and destroy the balance of the ecosystem4. When one equilibrium is thrown off, the nutrients in our foods, the state of the animals, and the quality of water, soil, and the air, are tipped drastically the side. Both toxic bacteria and chronic health changes escalate to an unholy level.

Our gut bacteria are incredibly important for a majority of the processes and pathways in our body. A study published in the journal Entropy7, argues that

By affecting the gut bacteria, glyphosate has the ability to interfere with the following: 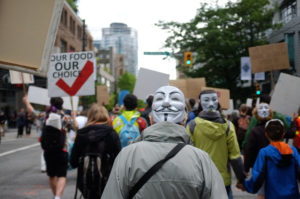 If we just lost you, don’t worry, we explain what each of the above means and their ramifications in our next blogs The Health Impact of Glyphosate Parts 1 and 2.

By offsetting these important systems in the body glyphosate has many long and short-term effects on our health. Some damage and disease processes that can be related to glyphosate including5:

This might sound outlandish to some however there are now a number of extensive reports that outline how Glyphosate works as an endocrine-disruptor (as are many herbicides) and damages DNA and drives of mutations that lead to cancer. To find out more about the ways glyphosate offsets the body please read our blogs, The Health Impact of Glyphosate Part 1 and 2.

Let’s not forget the historic trial against Monsanto that linked glyphosate to non-Hodgkin’s lymphoma recently settled in favor of the plaintiff. Regulatory agencies are revisiting glyphosate as a potential carcinogen. Dewayne “Lee” Johnson, a California schoolyard groundskeeper who routinely used a glyphosate formulation to control weeds, was diagnosed with non-Hodgkin’s lymphoma a few years after being exposed topically to glyphosate due to a faulty sprayer. Prior to the diagnosis but after the accident, he developed a nasty skin rash all over his body. He tried to contact Monsanto personnel to ask them if he should be concerned about the glyphosate in connection with the rash, and also with respect to potential harm to the school children. He never heard back from the company.

Key information from secret emails among Monsanto employees, obtained by the counsel, revealed blatant schemes to get prominent experts in the field to put their names on papers ghostwritten by Monsanto—papers “showing” that glyphosate is safe—in exchange for a handsome monetary reward.8 There were also open admissions that Monsanto never was going to do the experiments that were suggested to the company by researchers who revealed potential issues with glyphosate needing to be validated through larger studies. At the same time, Donna Farmer, a Monsanto executive, was quoted as saying, “You cannot say that Roundup is not a carcinogen.”

On August 10, 2018, the jury awarded Johnson two hundred and eighty-nine million dollars, with most of that amount (two hundred and fifty million) slated for punitive damages. This unexpectedly high award produced a number of important follow-on effects.8 First, the stock price of German conglomerate Bayer—the company that recently bought out Monsanto—plummeted, losing over ten billion euros in value in the week after the verdict. Next, activist groups like the Environmental Working Group (EWG) made mainstream news headlines with reports of high levels of glyphosate in common breakfast cereals like Cheerios. France engaged in a more aggressive debate about legislation to restrict glyphosate. And, as predicted, thousands of new cases accusing glyphosate of causing non-Hodgkin’s lymphoma are being brought to the attention of lawyers around the country. Those of us who have long been warning of the dangers of glyphosate to human health are starting to feel that this might be the long-awaited “tipping point.”

Despite the large win, one weakness of the trial was an inability to explain exactly how glyphosate could cause non-Hodgkin’s lymphoma. However, there is plenty of evidence, from both human and animal studies that glyphosate causes oxidative damage and chromosomal aberrations—two well-known precursors to cancer.8

As you can see there’s a lot to consider here.

Our final blog Addressing Glyphosate in your Body identifies some things we can do to remove glyphosate from our bodies and diets.

Together we can overcome this burden,