Milk: Is It A Health Food Or Not?

Milk: Is It A Health Food Or Not? 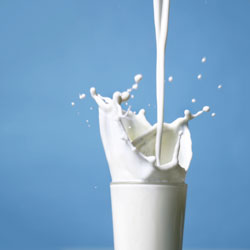 In my last post on Permeates we clarified why permeates are now added to milk. With this post let’s look at whether milk is indeed a health food or not?

Here ia an extract from Lunchbox Solutions on dairy…

Dairy or No Dairy? Full Fat or Low Fat?

What you will notice with our recipes is that we do not use many dairy products. This is not because we are worried about the fat content of these foods—quite the opposite. If you are going to choose dairy as your milk of choice, for example, then we recommend organic full fat milk rather than low fat milk.

Rather, we choose to be selective about what of type of dairy products we consume.

But aren’t all dairy products healthy?

The short answer is no. Some dairy products like organic butter and biodynamic yoghurt are wonderful but we’d encourage you to read more about the health limitations of many of the pasteurised, homogenised milks, over-processed cheeses and “liquid candy” yoghurts.

If we stop to consider it, we could conclude that drinking animal milk is an odd practice. After all, what other animal consumes the milk of a different species? What other mammal drinks milk beyond babyhood? The answer is, none.
Only in the industrialised West, as a 19th century phenomenon, has uncultured milk been consumed by the glass. Traditionally dairy products were cultured or fermented and eaten as yoghurt, cheese, curds or whey. This was partly for storage reasons, partly for nutrition. Dairy was (and still is in Mediterranean cultures) considered to be a condiment rather than a food staple. We believe that most of us consume far too many dairy products and that many of those foods are far from healthy.

But don’t we need cow’s milk for strong bones?

Certain dairy products provide us with calcium and are incredibly healthy in small doses, such as Parmesan cheese, which is reported to have the highest absorbable calcium content of any food. Good quality yoghurt reportedly has twice as much calcium as milk, and it is also rich in B vitamins, especially B2 and B12, and contains some folic acid.

Commercial cow’s milk, however, may not be the reliable source of calcium we have been lead to believe. A report published in the American Journal of Clinical Nutrition surveyed 57 clinical studies on dairy products and bone health, and researchers found that 71% of the scientifically valid research showed that dairy products had either no “bone-building” effects or actually did harm to bone.

A 12-year Harvard Nurses’ Health Study of 78,000 women found that those who drank a lot of milk broke more bones (a 45% increase) than those who drank far less, while those who received the same amount of calcium from non-dairy sources saw no increase or decrease in the rate of fractures.

There are two main concerns about cow’s milk.

1. Not all cows are considered equal!

Most of us consider milk we buy in the supermarket or local shop to be a safe, healthy product; however, any animal product we consume is only as healthy as the herd we take it from and cows today are by no means healthy. Today’s “super cows” are larger and heavier than ever before, bred to produce on average 2,000 pounds of milk per month, while some fifty years ago this volume could only be collected over a 12-month period.

Intensive and unnatural milking schedules can cause the cows’ udders to become painfully heavy and infected. To prevent this, the cows are routinely given large doses of antibiotics. According to the Journal of the American Academy of Dermatology, the residue of these antibiotics, along with growth hormones and pesticides from the feed, invariably wind up in the milk and meat we eat.

A study published in this same journal demonstrated a significant positive association between teenage milk drinking and teenage acne. The researchers suggested that the most likely explanation was the presence of hormones and “bioactive” molecules in the milk.

Most dairy cows are fed a concentrated diet of corn (or high protein, soy-based feed) which can lead to acidosis (too much acid in the blood and body fluids), a condition that weakens the immune system and leaves the animal vulnerable to a host of feedlot diseases. Cattle rarely manage to live on these diets for more than 150 days and 5-30% of them are found at slaughter to have abscessed livers. In tests by the Centre for Science in the Public Interest, 38% of milk samples in ten cities across the USA were found to be contaminated with drugs or other antibiotics.

Most of us would consider milk pasteurisation to be an integral part of sanitisation, freeing milk of bacteria so that it is safe to consume. Unfortunately, this process may also damage beneficial enzymes and bacteria that help to digest the milk.

A study on pasteurised milk showed that the process actually distorts the three-dimensional shape of the proteins in the milk and converts them into foreign proteins that the body finds hard to assimilate. Other research suggests that heating also affects the availability of minerals such as calcium in milk. It would seem that the more we process and alter milk, the more “challenging” it may be for our body to process.

Homogenisation—the process of breaking up fat globules so that they distributed evenly in the milk—may further compromise our ability to digest milk.

Are we suggesting no cow’s milk?

No. What we are saying is that not all cow’s milks are equal. Like any food choice, we suggest that you select high-quality brands that are as close to their natural state as possible. Also consider other food sources that may be high in calcium—the body requires calcium and not necessarily milk for strong bones.

We have created a table, Calcium Rich Foods, which outlines a number of foods that are rich in calcium. Some dairy products are on this list but rest assured you can provide your family with ample calcium through a well-balanced diet rather than a heavy reliance on cow’s milk.

Which Milk Products Do We Recommend?

We typically reserve cow’s milk (biodynamic only) for hot beverages and prefer to use organic rice, oat, nut and coconut milks in breakfasts, smoothies and with cooking. We do our best to avoid pasteurised, non-organic, low fat cow’s milk.

What is interesting is that many European countries continue to sell raw milk (unhomogenised and unpasteurised) and raw cheeses; they attest that raw milk can be produced hygienically and that it has health benefits that are destroyed in the pasteurisation process. Our milk of choice would be raw milk but it is not sold legally in Australia due to concern of potential dangers from milk not being pasterurised. 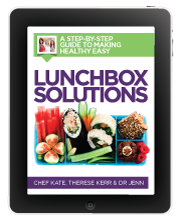 For more information and
super-tasty superfood recipes,
click here to take a look
at Lunchbox Solutions