Would you like a dose of pesticides with your green smoothie?

Would you like a dose of pesticides with your green smoothie?

Do you sometimes think that buying organic foods is just for high net worth individuals with too much cash? For the wee gullible? For the ‘Do Right’ families, keen to show the rest of us up?

Do you make your “green smoothie” in the mornings and guzzle it down convinced that the phytonutrient blast will outweigh the pesticide load?

Have you ever even considered that?

Do you think that washing your commercial fruit and veg. in water does the job of removing toxic sprays?

Maybe you weigh up your ‘social spend’, on alcohol, night clubs, dinners out etc, and prioritise these over organic produce in your weekly shopping budget. (SHOUT OUT to my eldest son, living the dream whilst at university in Spain!)

Or, perhaps you save your pennies where you can but you’re never quite sure which organic produce or products are more important than the others?

Well, this article is for YOU!

More and more research is now demonstrating that the harm caused by pesticides in our foods is no longer negligible, so we’d like to share with you some food for thought (hehehehe) that may help you reassess your values and spending.

So here’s a few reminders about how we are exposed to pesticides and the dangers involved, to help fortify our resolve so that spending our hard-earned cash on what seemingly looks the same, becomes not only more palatable but more essential. Actually, to be fair sometimes organic produce looks a wee bit drabber than its bigger, glossier, more perfect ‘traditional’ counterparts so it’s crucial we understand why pesticide free is so important.

In a rural context, exposure to pesticides is par for the course for farm workers via crop spraying and the treatment of livestock with anti-parasitic preparations, e.g. sheep dip. Rural residents living next door to farms are starting to become aware of their exposure to pesticide drift, reminiscent of passive smoking.

In our towns and cities, we are exposed to pesticides through the spraying of our public amenities, such as our parks, pavements and playgrounds. Further, many people buy pesticides off the shelf for home and garden use. It’s unlikely any of us have not, at one point or another, gone on a mission to rid our driveways of weeds with a lethal dose of Round Up. My Dad uses this effective chemical spray to edge his front lawn, for Pete’s sake! 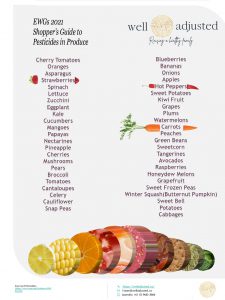 Pesticide residues found on, and in, our food also puts us at risk.

In addition to our passive exposure via spraying the aforementioned parks and schools, within forestry, professional and domestic pest control, through the treatment of wood with preservatives and the treatment of boat hulls with anti-fouling agents, you can no doubt glean that chemical exposure at greater than preferred levels is the result.

Pesticides can cause harmful effects over extended periods of repeated or continuous exposure at low levels. Low doses don’t always cause immediate effects, however over time, they can cause very serious illnesses. Do a little research on pesticides and health impact and you’ll find a multitude of referenced articles that have linked pesticides to cancer, Alzheimer’s Disease, Parkinson’s disease; asthma; depression and anxiety; attention deficit and hyperactivity disorder (ADHD); autism and cancer, including leukaemia and non-Hodgkin’s lymphoma and even birth defects. Pesticides also have the potential to harm the nervous system, the reproductive system, and the endocrine system. Although one piece of fruit with pesticides won’t kill you, pesticides build up in the body. This build up can be potentially detrimental to our health and should be avoided as much as possible.1

Here’s just a couple of cliff notes from some clinical studies that indicate the potential harmful health effects of pesticides:

It is suggested that agricultural chemicals have contributed to a reduction in semen quality, worldwide. Data indicates a general trend, suggestive of an association between PCBs and p,p-DDE and abnormal motility, as well as with sperm concentration and morphology in parts of the world with the highest pesticide load.

The journal, Human Reproduction Update, gathered data from researchers based in Israel, the US, Denmark, Brazil and Spain. It found that the total sperm count has fallen by 59.3 per cent between 1971 and 2011. In Europe, North America, Australia and New Zealand, sperm concentration has fallen by 52.4 per cent.2

One of the team, Professor Shanna Swan said,

“This definitive study shows, for the first time, that this decline is strong and continuing. “The fact that the decline is seen in Western countries strongly suggests that chemicals in commerce are playing a causal role in this trend.”

Pesticides can be harmful to foetuses, as these chemicals can pass from the mother during pregnancy or via breastmilk if a woman nurses her child. Exposure to organophosphate pesticides, especially prenatally, appears to significantly increase susceptibility to attention-deficit/hyperactivity disorder (ADHD). Investigators found prenatal exposures had a greater association than did exposures after birth. A 10-fold increase in levels of urinary DAP metabolites in the mother’s urine during pregnancy correlated to a 500% increase in the diagnosis of attention disorders in 5-year-olds, according to the study of over 300 children.3

In a study4 led by Maryse Bouchard in Montreal, researchers based at the University of Montreal and Harvard University examined the potential relationship between ADHD and exposure to certain toxic pesticides called organophosphates. The team analyzed the levels of pesticide residue in the urine of more than 1,100 children aged 8 to 15. They found that those with the highest levels of dialkyl phosphates, which are the breakdown products of organophosphate pesticides, had the highest incidence of ADHD. Overall, they found a 35% increase in the odds of developing ADHD with every tenfold increase in urinary concentration of the pesticide residue. The effect was seen even at the low end of exposure: kids who had any detectable, above-average level of the most common pesticide metabolite in their urine were twice as likely as those with undetectable levels to record symptoms of the learning disorder.

“I was quite surprised to see an effect at lower levels of exposure,”

says Bouchard, who used data on ADHD from the National Health and Nutrition Examination Survey, a long-term study of health parameters of a representative sample of U.S. citizens.

These findings support the hypothesis that organophosphate exposure, at levels common among US children, may contribute to ADHD prevalence.

Yet another study suggests that an offspring’s risk of autism spectrum disorder increases following prenatal exposure to ambient pesticides within 2000 m of their mother’s residence during pregnancy, compared with offspring of women from the same agricultural region without such exposure. Infant exposure could further increase risks for autism spectrum disorder with comorbid intellectual disability.5

It amazes me that folks (including some of my own family) still argue that the so-called benefits of organic produce are just hype. My assumption is that those who hold this steadfast view haven’t looked at the compelling research on pesticide exposure. The truth is we can no longer afford the luxury of burying our heads in the sand, when infertility, neurodevelopmental issues and chronic diseases are escalating!

A Word On Kale

Folks have gone crazy about Kale the last couple of years, and rightly so. It’s full of vitamins A and K, iron, fibre and powerful cancer-fighting phytochemicals.  More than 90 percent of the kale samples sold in the U.S. (and dare I say elsewhere, we just don’t have a powerful group like the EWG pursuing or analysing the data), however, are contaminated with pesticide residue.

More than half of those samples gathered by the Department of Agriculture in 2017 contained a pesticide called DCPA, often marketed under the name Dacthal. It’s a pesticide the EPA classified, in 1995, as a possible carcinogen, noting that it was associated with increases in liver and thyroid tumours. It can also cause other kinds of harm to the lungs, liver, kidney and thyroid. In 2014, the EPA concluded that Dacthal may interact with thyroid signaling, and requested more data specifically on thyroid toxicity for sensitive populations like children and babies in utero.

To confirm that this possible carcinogen and hormone disruptor is still being used on kale, the EWG commissioned tests of kale from grocery stores in February 2019 and found Dacthal residues on samples at levels comparable to those found by the USDA in its 2017 testing. So, it certainly looks as if Dacthal is still sprayed by growers on conventional kale.

That’s not all. Our analysis of 2017 USDA data showed that, on average, kale samples had detectable levels of 5.6 different pesticides, with as many as 18 different residues on just one sample. YIKES! 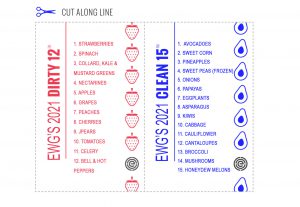 Don’t know about the Dirty Dozen or Clean 15?

If you’re wondering which produce tends to be sprayed more than others, a key resource cited is EWG’s Shopper’s Guide to Pesticides in Produce. We’ve provided it here for you as well as a cut version for your wallet. You’re very welcome!

Make sure you visit EWG website for a host of useful studies and resources to help you live a cleaner life.

For our family, I push the budget as far as I can to purchase organic food items. When the budget is tighter, I buy organic, grass-fed and pasture raised meats (beef and chicken) as my priority, since conventional meats are often much higher in pesticides, antibiotics and unhealthy fats (and lower in Omega-3s and CLA). Additionally, organic butter, olive oil and prioritize buying the “Dirty Dozen” organic and worry less about the “Clean 15”.

For tips on homemade fruit and veg washes see our blog- Making Your Own Fruit and Vege Wash.

Full List of EWG 2019 Shoppers Guide to Pesticides in Produce is as follows: 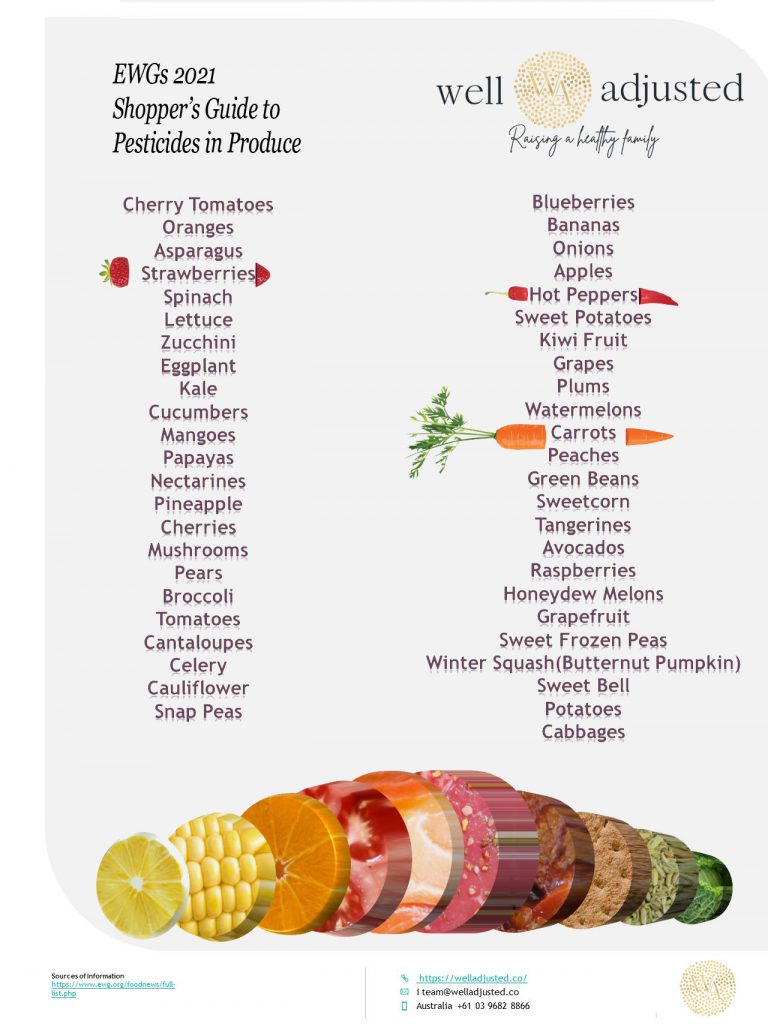 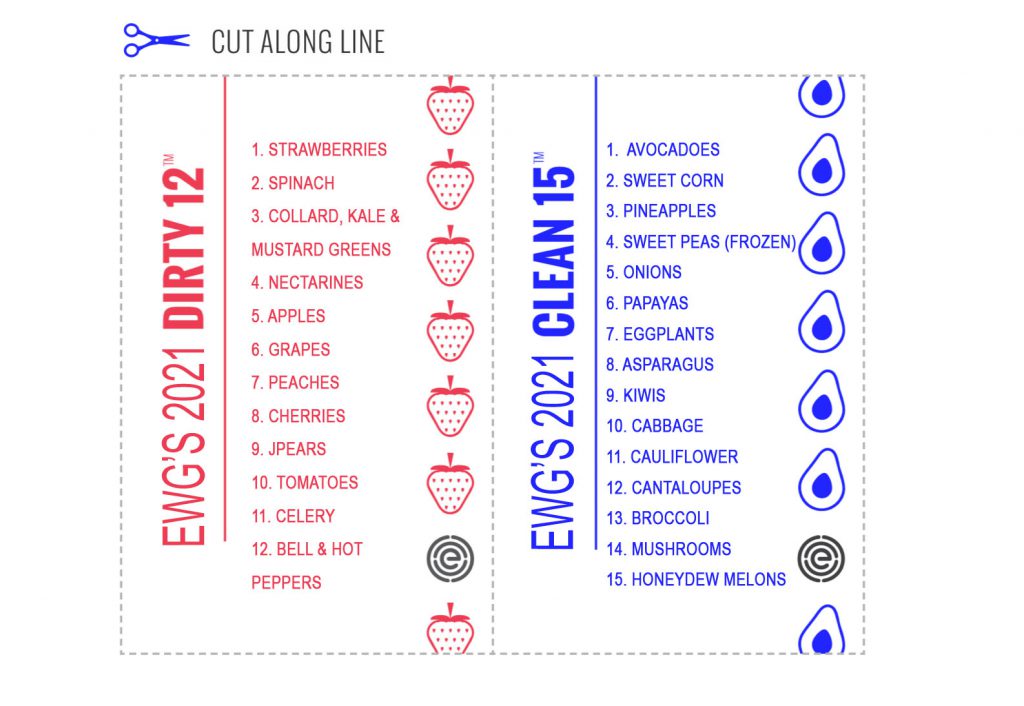 Making Your Own Fruit and Vege Wash.

Which fruits have the most pesticides!?!

How To Boost the Mother of All Antioxidants: Glutathione!

Why is Glutathione so Vital?

Attention-Deficit/Hyperactivity Disorder and Urinary Metabolites of Organophosphate Pesticides. May 17, 2010; Pediatrics

PrevPrevious ArticleMake Your Own Fruit And Vege Wash
Next ArticleA Probiotic Twist On Gaucamole!Next